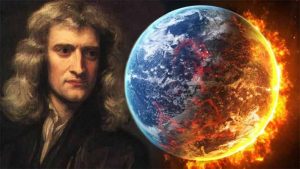 Humanity has been waiting for the end of the world for a very long time. The most recent example is from 2012. Many were stocking up on canned goods and other essentials. But regardless of whether the Mayans were wrong or whether we misunderstood them, the end of the world did not happen. Nothing catastrophic on a global scale happened on December 21, 2012.

Is there a reason to be afraid now? Are there any prophecies pointing to a specific date? And not dubious predictions of illiterate impostors, but of respected people – like the Mayans.

Every year, we are entitled to the so-called predictions of Baba Vanga and Nostradamus. In most cases, the end of the world is always associated with them in one way or another. But seriously, today, we can no longer believe in any of them. 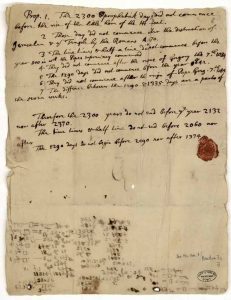 Here is another name that has been associated with doomsday predictions over the past two decades: famed scientist Isaac Newton. From information taken from his personal manuscripts, we know that he was trying to calculate the exact date of the apocalypse – that is, 2060. Here’s what we know.

The fact that Isaac Newton indicated the date of Armageddon, experts learned at the end of 2002, when manuscripts containing his notes were discovered.

They had been kept for many years in the National Library of Israel among the unsorted archives of the author of the first, second and third laws and, of course, the law of universal attraction.

After scientists discovered and read previously unknown manuscripts of the genius, it turned out that in addition to mechanics, physics and mathematics, he also studied alchemy, occultism, astrology and theology.

After Newton’s death in 1727, thousands of pages devoted to his “secret passions” were kept for over 200 years in a chest in the Earl of Portsmouth’s household. In 1936 most of the manuscripts were purchased at auction by Jewish scholar Abraham Yehuda.

They thus landed in the National Library of Israel.

This is where Newton’s manuscript containing a prophecy about the end of the world in 2060 is located. It was discovered by Stephen Snobelen, a professor at Harvard University, who began the first research.

Newton’s manuscripts, hitherto inaccessible, testify to the fact that alchemy, theology and the occult were celebrating, and that his serious discoveries were the result of this “obscurantism”.

For example, the law of universal attraction did not appear at all thanks to the famous apple, but thanks to the concept of attraction of one element to another, professed by alchemy. Another example is Newton’s famous physical theory of absolute space and time, which was based on the theological ideas of the genius of physics.

He believed that absolute space is the place inhabited by God, the form of existence of his universal spirit, and that absolute time is the infinite duration of the divine presence.

Also, Newton believed that due to the divine structure of the universe, every impact is transmitted instantaneously to each of its points without the participation of matter. It is curious that this theory is also taken into account by some modern physicists who study vacuum and quantum mechanisms.

Now let’s take a closer look at Newton’s actual predictions and the apocalypse.

Part of a 1704 letter to a friend, in which Newton calculates the day of Revelation using the book of Daniel

Newton treated the Bible with a special mystical reverence – he studied it all his life. He believed that the scriptures contained messages from higher powers about the future of the world. He dreamed of creating a system that would allow the Bible to be used to predict that future.

Another well-known source also attracted the attention of a genius: the book of Daniel (Old Testament), in which the prophet accurately predicted the date of Christ’s coming to Earth, the death of the Son of God and his resurrection.

Newton believed that God chose the prophet Daniel to interpret the future. And to “see” it, you have to decipher the book – every word. What Newton did for many years – almost 50, also considering himself chosen by God – trying to decipher it.

Mathematically calculating the date of the end of the world, he wrote 4,500 pages of words and formulas. The book of Daniel itself is a collection of prophecies.

Newton interpreted them with the aim of creating an algorithm capable of predicting future events. What happened in the end remains to be seen – the records have not been fully investigated. Only the mysterious date of the end of the world, 2060, has been discovered.

Having understood the essence of Newton’s manuscripts, Professor Snobelen discovered that the scientist had deciphered the indications of the Bible for certain periods of time. Newton defined one of these periods as 1260 years. He then calculated that this period began in the year 800 CE.

He added 1260 years and got 2060. Newton himself wrote that a world war would start and then there would be a plague which would lead to the destruction of a significant part of mankind. But after the tribulation is over, the kingdom of Messiah will come, and the world will have a new beginning.

In other words, it must be noted that, while prophesying about the end of the world, the diviner still believed that after difficult times for mankind, an era of prosperity would come when God would live among the peoples in order to relieve the tears of their suffering.