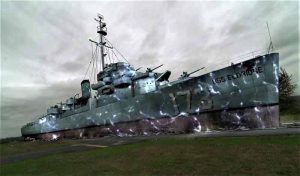 In the summer of 1943, in the middle of World War II, an American battleship tested a technology designed by Einstein himself and managed to become invisible and teleport. The Philadelphia Experiment was born. At least that’s what some theorists say. This is the true story of the USS Elridge, the ship that “traveled back in time”. 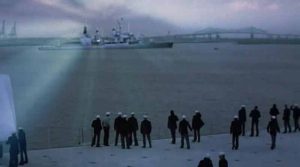 The Legend of the Rainbow Project

What is commonly referred to as the Philadelphia Experiment alludes to an obscure US Navy program called Project Rainbow.

According to an urban legend, the military was testing an electromagnetic field generator in an attempt to find practical applications for Albert Einstein’s unified field theory.

In a nutshell: they were trying to master invisibility.

Special technicians who did not know what they were installing mounted two powerful generators, tens of meters of electrical cables around the hull and other complex electronic devices on the USS Elridge, a 93-meter-long battleship.

On July 22, 1943, the first “experiment” took place. The generators activated an electromagnetic field that caused the battleship to disappear from sight for a few minutes in a greenish haze.

Some sailors have complained of severe nausea from the test.

The equipment was readjusted and on October 28 the second test took place. This time the ship disappeared completely and appeared at Naval Station Norfolk, 600 kilometers away and 15 minutes later.

He was sighted there during this time. After that, he disappeared again in a blue flash to return to Philadelphia.

According to urban legend, the consequences of this second experiment were so devastating for the crew that the Navy decided to cancel the project. Most sailors developed schizophrenia and some lost their minds completely.

Many were badly injured when they materialized, and others, less fortunate, horribly fused with the ship’s hull. Some disappeared several days after the experience and never reappeared.

The Navy has always denied the existence of the Philadelphia Experiment. In a statement released in November 2000, the Navy’s Office of Naval Research (ONR) completely denied the existence of any invisibility or teleportation program, as well as Einstein’s involvement.

In a summary of the note published by Naval History & Heritage, it is stated:

The Office of Naval Research (ONR) has previously explained that using force fields to render a ship and its crew invisible does not conform to the known laws of physics. The ONR also claims that Dr. Albert Einstein’s Unified Field Theory was never completed.

Between 1943 and 1944, Einstein worked as a part-time consultant to the Navy for theoretical research on explosives and explosions. There is no evidence that Einstein worked on anything related to invisibility or teleportation.

Indeed, Unified Field Theory is a concept invented by Einstein when he tried to explain the gravitational field and the electromagnetic field in one unified theory.

He never succeeded, but a lot of people don’t care that the laws of physics ruin a good story.

So how did the Philadelphia experiment come to light? The answer lies in a series of letters sent by Carl Meredith Allen under the pseudonym of Carlos Miguel Allende.

Allen was apparently a merchant seaman who saw the USS Elridge disappear from his own ship, the SS Andrew Furuseth.

With a rather peculiar prose and many mistakes

Although the sailor never provided hard evidence for his claims, Jessup was fascinated by this account and included it in a book called The Case For The UFO.

Jessup failed to repeat the moderate success of this book and committed suicide four years later. The circumstances surrounding his death have fueled the theory that the experiment existed and that the government has been trying to cover it up ever since.

The urban legend of the Philadelphia experiment was officially born. 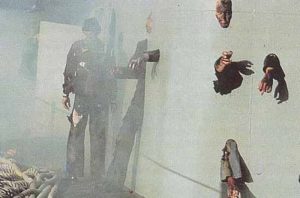 The truth about the Philadelphia experiment

The Philadelphia experiment is a complex mix of Allen’s fevered imagination, Jessup’s gullibility, real events and hearsay from sailors. The first thing that doesn’t match are the dates.

Official records indicate that the USS Elridge was launched on July 25, 1943, two days after the alleged first experience. It officially entered service with the New York Navy Yard on August 27, 1943.

What is certain is that in the 1940s the US Navy was experimenting with invisibility. Of course, it wasn’t naked-eye invisibility. The USS Elridge and her sister ship, the USS Engstrom, have been fitted with a new system that encircles the entire hull with electrical wires.

This technique, called degaussing, was intended to reduce the ship’s magnetic field so that it would not be an easy target for magnetic mines and torpedoes used by Nazi submarines.

This technique became very popular in the 1940s and was applied to military and civilian ships.

As Edward Dudgeon, one of the sailors aboard the USS Elridge explains, the degaussing system was installed by outside contractors.

Not knowing exactly what they were installing, coupled with jokes from sailors about a system to “turn the ship invisible”, was enough to spark the gossip.

Added to this is the fact that the ship was indeed carrying secret experimental material. It was a new type of sonar and depth charge seeding system called the Hedgehog.

The “lightning” referred to in the urban legend regarding the Philadelphia experiment could be something as simple as the ionized plasma discharge long known as the San Telmo fire.

As for the mysterious disappearance of the USS Elridge, Dudgeon explains that this part of the urban legend stems from an incident at Norfolk Air Force Base.

The Elridge called at the base to refuel, but quickly cast off and returned to Philadelphia, where she arrived in less than six hours.

According to maps of the area, this crossing was impossible as it required a long detour to avoid German U-boats and minefields. In reality, the ship was using the Chesapeake & Delaware Canal, which makes it possible to skip the peninsula detour.

Dudgeon explains how his and a comrade’s departure through the back door during a tavern brawl spurred rumors of missing sailors from the USS Elridge.

Neither Edward Dudgeon nor his barmate was of drinking age, and when the fight broke out, the bartender ushered them out the back door to avoid any trouble with the authorities.

For many, Dudgeon’s story is just a cover for a crazy experiment.

On January 15, 1951, the USS Elridge was transferred to Greece, where she served as Leon. The ship was decommissioned in 1999, and ended its days peacefully in a landfill.

The legend of the Philadelphia experiment was hardly tempered when a group of USS Elridge veterans gave an interview in 1999 in which they amusingly commented on the matter.