The Las Vegas Strip is just a small 4 mile strip of land, but it’s a place where just about anything can happen. The residents of “Sin City” are no strangers to the strange and unusual; in fact, UFO sightings are common in Las Vegas. And that makes perfect sense. After all, the famed Area 51 Air Force installation and alleged alien experiment site is only a few miles away in the desert.

In this context, it is not surprising, or even extraordinary, that multiple UFO sightings surfaced just days before Christmas 2022.

While at Sapphire Las Vegas for a night of work, a group of employees noticed a strange “spot of light” in the sky. Although obscured by clouds, a cluster of red, white and yellow lights was clearly visible above the club.

Sapphire manager Brett Feinstein was among the witnesses to the strange event, recording the lights with his phone before posting it on social media as evidence of the UFO.

“Honestly, that’s really weird,” Feinstein said, looking up to show the glowing orbs. “I mean, we’re here every night. I have never seen anything like it. »

The sighting of a UFO in Las Vegas immediately sparked an avalanche of responses, many of which agree that the lights were, without a doubt, those of an alien craft.

“Of course he is, because he reflects the light when it hits him!” There really is something up there,” one user wrote. “What happens in Vegas stays in Vegas. Unless you see a UFO, don’t stay in Vegas,” another joked. 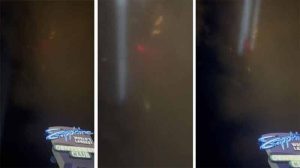 Others came up with questions: “When, exactly, did Feinstein see him?” Did he hire actors to pretend to see the UFO at the same time as him? Was it all just a promotional ploy for his club? »

Feinstein, however, assured them that it was not a hoax. “I was told at 11:47 p.m. ,” he wrote in the replies. “I think he was there a little before I arrived. Our security guard Sapphire said he saw something go by and then it appeared. He stayed there for several hours. Eventually it started to fade behind the cloud cover. He never moved or made a sound. »

Experts believe this UFO was actually a rare atmospheric phenomenon

According to the National Weather Service, there is a valid, albeit rare, explanation for these lights, and it has nothing to do with UFOs. Experts believe that they were “pillars of light” because the light cluster was not moving and the temperature of the clouds was low enough to produce the phenomenon.

“The long, multicolored columns of light criss-crossing the sky look like the perfect backdrop for an impending alien invasion,” the NWS wrote on its official website . “But in reality, the pillars of light are a common effect found all over the world.”

“They come from above, not extraterrestrials, but small ice crystals suspended in the atmosphere. …Ice is very reflective, so when light hits these larger faces, it bounces off and reflects off other ice crystals. »

“That means we have these vertically stacked mirrors floating in the atmosphere,” they continue. “The light that hits it reflects up and down (or down and up, depending on the source) and becomes a radiant column in the sky. The light can come from the sun, the moon, cities, streetlights, any strong light source. »

Post Views: 101,464
Tags: A colossal UFO was visible for several hours in the skies of Las Vegas