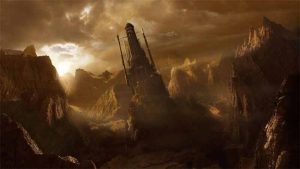 These strange structures, similar to walls or partitions, are up to 300 meters high and surround lakes in the polar regions of Titan. 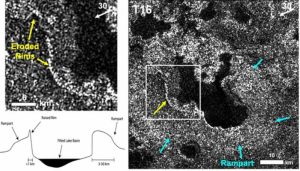 Using observations and data collected by the Cassini spacecraft, scientists have explored a group of walls that appear to have isolated several sinkholes and lakes on Saturn’s largest moon.

Anezina Solomonidou, ESA researcher at the European Center for Space Astronomy and lead author of the study, explains that the formation of Titan’s lakes and their characteristics remain a mystery to science.

The walls could provide key clues to how the satellite’s lake-covered polar regions turned into what they are today.

The team of scientists studied five entire regions near the north pole of Titan, an area filled with lakes and these strange walls. They also saw three completely empty lakes nearby, for comparison.

The lakes vary in size, with the smallest measuring around 30 square kilometers and the largest up to 670 kilometers.

All the lakes were completely isolated from the outside by large walls up to 300 meters long and extending up to 30 kilometers inland from the edge of the lakes. 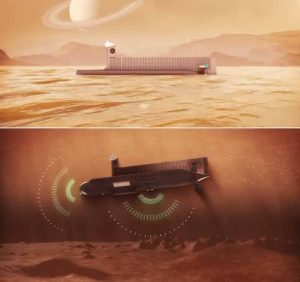 Project officials suggested two possible mechanisms that could have generated the walls. But it is still prudent to decide, because they are at a preliminary stage and far from being conclusive.

One of the first possibilities is based on the fact that the floors of totally empty lakes and full lakes have different altitudes.
Based on this, scientists believe that a process involving a subsoil saturated with groundwater generates these defenses.
<
The other possibility is that a lake basin and the surrounding crust first harden and then deflate. This leads the lake to seep underground. The part of the area that does not deflate protrudes from the surrounding terrain and creates the great wall.

What scientists don’t yet understand, however, is how walls form so evenly and completely around lakes, isolating them completely.

They assume a scenario in which a hydrocarbon lake forms first, then a rampart and finally a rim, which erodes due to its weaker composition.

However, if the rim and the wall are both made of the same material, the explanation makes no sense.

What do you think about that, and how do you think these strange walls formed in the lakes of Titan, and could conspiracy theories have something to do with it?