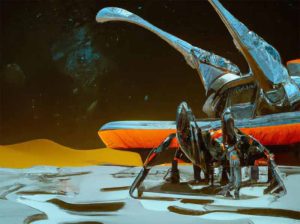 Before you get excited about this title, we would like to remind you that there are many arguments that point to this statement being false. But for the sake of scientific speculation, let’s put aside all disbelief and take at face value the book Habitability of the Universe Before Earth , published in 2018 by Alexei Sharov and Richard Gordon.

The bottom line is that if Moore’s Law is applied to the demonstrated exponential growth of genetic complexity over time, then life as we know it formed about ten billion years ago. Why is this important? Because the modern age of the Earth is estimated at only 4.5 billion years.

This suggests all sorts of intriguing possibilities. First, in this scenario, the panspermia variant is an inevitable conclusion. Life did not appear on Earth.

Panspermia is the hypothesis that life on Earth originated from life forms present in space, which were brought to Earth by meteoroids, asteroids or comets.

Of course, this idea isn’t new, but science fiction as a genre now has some numbers to work with. Further, we have the possibility that in the search for extraterrestrial intelligence, we as a civilization are not retarded children in a galaxy teeming with much more advanced races.

We may well be the most advanced intelligent race ourselves.

Consider This: We have always believed that it takes at least 4.5 billion years for an intelligent civilization to develop. Now there is evidence that it could take up to 10 billion years.

Of course, we omit many factors, such as crushing asteroid impacts and other mass extinctions, that can disrupt the development timeline, but we do not account for such physical history. We observe a constant increase in the complexity of the genetic material.

It is assumed that it somehow persists during these disasters and continues to grow. After all, it migrated through interstellar space through unspeakable and unimaginable cataclysms – perhaps the destruction and reshaping of star systems – and took root on our little blue sphere called Earth.

This explains, according to the theory, the Fermi paradox: we don’t hear about other intelligent species because they are either close to or behind us in terms of development.

That’s why we’re not invaded by beady-eyed monsters, gray space aliens from hives, or multi-leafed pachyderms from Alpha Centauri. Besides, it’s more likely that we are the invaders, like in James Cameron’s Avatar.

But behind all this, there are some really interesting questions:

– Where did life appear about 10 billion years ago?

– Was it localized, for example, around a star which existed then died, and the matter reformed to give our current star and its complement of planets?

– Did it spread through our galaxy and penetrate into space, seeding all other favorable environments, such as Earth?

– Are there other extraterrestrial forms of DNA-like substances that formed at other times and under other conditions, and are seeding other parts of the galaxy?

This postulate gives rise to endless speculation – which is the fuel of good science fiction – but, more importantly, it provides a more reliable starting point because, despite the inconclusive evidence, it really is the best that we have at the moment.

It also gives us something to test. Now, if we finally find convincing examples of life beyond our planet, we can check whether they fit the Earth model.

Although we don’t know what extraterrestrial life looks like on other planets, it is possible to imagine what it might look like. It is also possible to hypothesize the environmental conditions and evolutionary processes that may have led to the development of this extraterrestrial life. These speculations can be a fascinating way to explore the possibilities of what life beyond Earth might look like.

Additionally, the panspermia theory suggests that life may have been brought to Earth from other parts of the universe, which would allow life to exist on Earth even though it originated elsewhere.