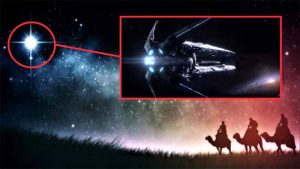 Was the Star of Bethlehem a UFO? Its seemingly directional trajectory has led many researchers to consider the possibility that intelligent beings may have inhabited it, among other theories…

Magi have come to a small town in Palestine called Bethlehem, following a strange sign in the sky.

It is a warm spring of the fourth, or perhaps the fifth, year BCE, a time when a story is being written that will resonate deeply with billions of people for the next 2,000 years.

These sages are aware that they are at the end of a long journey that they began more than three months ago in their distant homeland of Mesopotamia.

A road that has been strewn with difficulties and challenges of all kinds, but in which the direction to follow was always clear.

There was something in the sky that showed them the way:

Some would later call it a star, but others would say it was something different, one of those lights that appear in the sky from night to night and cross it.

A bright light that told them where to go, that moved with them, and that, when they had to stop, remained motionless in the sky. A strange light which many believe that, if it had to be given a name, the key word today would be “UFO”.

These sages from the East saw from their observatories a strange light that had suddenly appeared in the sky and decided to follow it. Every day the light moved with them and when it reached the Mediterranean it stopped above the city of Jerusalem.

There, these sages spoke to the king and explained to him that the reason for their journey was to pay homage to the new heir, to the new king who had just been born. 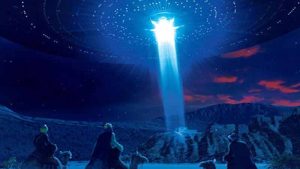 Then the magicians again followed the light moving across the sky until it stopped over this small town just 7 km from Jerusalem. It was the sign that their journey was over. Here is the chosen one.

“When Jesus was born in Bethlehem of Judea, in the days of King Herod, the Magi came from the East to Jerusalem, saying, “Where is the King of the Jews who was born? “. For we have seen his star in the east, and we have come to adore him’”.

These lines from the Gospel of Matthew are the first reference to the star of Bethlehem. An allusion which is completed a few verses later when, after the interview of the Magi with King Herod, the biblical text says:

“Behold, the star which they had seen in the East preceded them until, arriving, it stopped where the Child was. And when they saw the star, they rejoiced with very great joy”.

What could be that light that apparently intelligently guided them on their journey?

Many possible answers were considered: from astrological alignments to unusual astronomical phenomena such as meteorites, new stars or comets, to spectacular planetary combinations.

But all these possibilities do not explain the strange behavior of the singular star that guided the Magi from the East. A behavior that many specialists have not hesitated to describe as intelligent.

The Star of Bethlehem not only indicated the path they had to follow, but more importantly, it stopped twice to indicate where they had to stop: first above Jerusalem, then above Bethlehem, where the newborn Jesus was.

No natural phenomenon can justify this wonder, and only if it were something intelligently controlled could such behavior be explained.

If one accepts the reality of the biblical account, there is no natural explanation that matches the description of the star of Bethlehem.

Post Views: 100,399
Tags: Star of Bethlehem: Investigators Say It Was a UFO