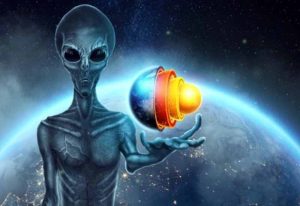 Researchers decided to send a message to inform aliens about Earth’s climate crisis and possibly ask for help.

The message was crafted by a group called Messaging Extraterrestrial Intelligence (METI) International who want to send a message, encoded in a radio signal, to the TRAPPIST-1 planetary system, which contains at least seven Earth-like planets.

“The extraterrestrials who receive our message will not be surprised to hear about our climate crisis. They have had decades to observe our plight from afar,” said Douglas Vakoch, president of METI International.

“The great challenge of interstellar communication is to establish common ground,” Vakoch added. To achieve this, Goonhilly’s post will begin with the periodic table of elements.

Since the chemical elements are universal, any extraterrestrial with scientific knowledge should recognize the periodic table, argued METI International. This content would create common ground for the post to then describe some of the environmental challenges we face here on Earth.

Scientists hope that given the 13.8 billion year history of the universe and the relative youth of humanity, the extraterrestrial civilization that received the message could be older and more advanced than our own, and could therefore offer its help in the fight against climate change.

The authors of the message hope that this age gap could give hope to humans facing the climate crisis. If an alien species has managed to survive for millions or even billions of years, experts assume that it has long since overcome any climatic problems it may have faced and now lives in a stable society.

Post Views: 100,194
Tags: Scientists send a message to aliens to alert them to the climate crisis on Earth