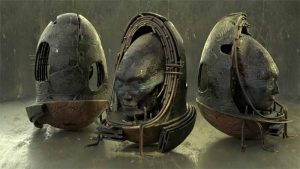 Are the “Hungry of Saqqara” grotesque or marvellous? Useless or worthless? A fake or genuinely antique work of art? For more than a decade, many have been trying to establish the origins of these strange sculptures.

Archeology is one of the most delicate missions in the world. With an animal bone, lost papyrus or a tool buried a few meters underground, researchers must transcribe all the ancient stories of human civilization.

They combine all the discovered elements, like a puzzle, and the story finally begins to make sense.

Sometimes, however, they come across puzzle pieces that don’t fit any part of the conventional description. In these moments, their work becomes even more delicate, because they must “decode” the place and the role of these elements.

67 cm high, these limestone figures are very disturbing, they have elongated skulls, flaccid mouths and their limbs are very thin. Squatting naked face to face, one puts his hand on the arm of the other.
Inscriptions, written in a language not yet deciphered, have been engraved on the base.

Little is known of its origins, except that it was brought to Canada to be included in an exhibition of Egyptian artefacts at the Ars Classica gallery in Montreal by the Diniacopoulos family, collectors of antiquities at one time. a time when the trade in ancient treasures was occasional and poorly controlled.

However, since the artifacts from this set were legally authorized for export, experts from Concordia University, which acquired the sculpture in 1999, believe the statue is a genuine antique and may have come from one of the tombs of Saqqara. 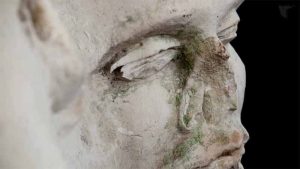 Saqqara was the main cemetery of Memphis, the ancient political capital of Egypt, in the fertile Nile Valley.

It is a huge cemetery and many tombs have yet to be investigated by archaeologists, although many of them fell victim to grave robbers in earlier times.

According to Clarence Epstein, director of special projects and cultural affairs at Concordia University, the sculptures could have come from a tomb in ancient Egypt and represent “conquered and enslaved individuals”, people enslaved by an ancient monarch.

His theory is that it comes from a very ancient burial site or tomb, dating from before the rise to power of the first pharaohs in Egypt.

Epstein says it must be 4,000 years old or older, making it a very, very rare find. Another archaeologist suggested that the statue came from a pre-dynastic tomb and could be totally forged.

However, Professor George Harrison of Concordia’s Classics Department doubts this is the case.

“We only fake the things that are important. You forge a coin of Alexander the Great because he is famous and someone wants to buy the mystique. You can’t counterfeit something like that,” he said.

Some argue that if their origin really comes from the Saqqara tombs, these statues could support claims that there were elongated-headed beings in ancient Egypt, and that many of them even held high court positions. pharaonic.

But they wonder why they were depicted looking haggard, as if in pain. For the moment, the statue “The Hungry of Saqqara” remains an unsolved mystery.