For over two years my colleagues and I, including the research team at Skinwalker Ranch, have been exploring the hypothesis that connects certain geological locations, human awareness, ancient indigenous sites, paranormal encounters, and UFO hot spots in a more unified way – if one exists. 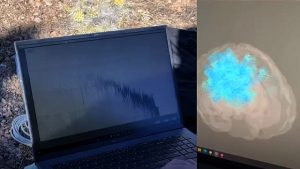 As it turns out, several of these locations have been, or are currently still, being explored for supernatural anomalies connected with these factors. The current discoveries regarding quantum physics is directly informing our understanding of ourselves and how this affects all forms of contact with the paranormal. Locations like Mount Wilson Ranch, and Skinwalker Ranch, provide the absolute best historical provenance to ask these questions. And we are asking directly!

The concept of non-local consciousness refers to the idea that consciousness may not be restricted to the brain or the body, and may instead be a fundamental aspect of the universe that is non-local, meaning it is not bound by the constraints of space and time.

This idea is not widely accepted within mainstream science, and there is currently no scientific evidence to support it, although there is a tremendous amount of independent research results and professionals who have substantial evidence otherwise.

Remote viewing is a term that refers to the purported ability to use extrasensory perception to obtain information about a distant or unseen target using subjective means, such as intuition or meditation. Remote viewing has been the subject of some scientific research, particularly by organizations such as the National Institute for Discovery Science (NIDS) lead by Bob Bigelow and in conjunction with Hal Puthoff and members of the Stanford Research Institute (SRI).

One of the main arguments for the existence of non-local consciousness is the idea that remote viewing may be a form of non-local perception, meaning that it allows individuals to access information about distant locations or events without the use of their physical senses.

If amplified frequencies within the psychoactive ranges could be discovered in locations of high strangeness, this could prove to be a critical part of understanding the disclosure process. It may help us understand the forms of “contact” that is depicted in ancient petroglyphs, and retold in oral traditions of indigenous people for thousands of years.

It may also help explain our own personal paranormal experiences, UFO sightings, abduction experiences, and the potential of what that means in our reality as it unfolds.