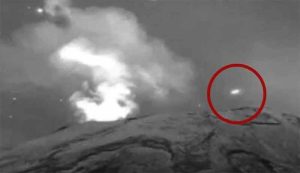 The strange luminous object (UFO) entered the crater of Popocatépetl while a small explosion was recorded in the volcano. 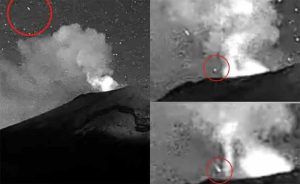 This amazing event occurred at 5:46 a.m. on October 5 at the Popocatépetl volcano in Puebla, Mexico.

The cameras of “Webcams Mexico” captured this incredible event. In the clip, a luminous object (UFO) can be seen at the top of the volcano plunging into the crater.

However, the object is lost in the smoke emitted by “Don Goyo”, because at that moment, a small explosion occurred, from which came out an incandescent material.

Then the UFO reappears on the scene and is seen to pause slightly, then give the visual effect of entering the crater. It even gives the impression that the object is accelerating its speed.

Several theories have been put forward, the most popular being that it was a supposedly extraterrestrial spacecraft.

Another theory, the most widely accepted, is that it was a shooting star. However, the authorities have not made a statement about this event… What do you think?

Is Popocatépetl an extraterrestrial base?

Dozens of UFO sightings have been recorded around Popocatépetl; the video cameras of government agencies, television stations and businesses in general, as well as UFO hunters picked them up.

Experienced mountaineers claim to have seen beings over two and a half meters tall walking unprotected at over 4,400 meters above sea level.

The locals mention that strange beings inhabit the bowels of the volcano.

Extraordinary stories are woven around Mexico’s eternal guardians, whether it’s the Iztaccihuatl volcano or Popocatépetl, where videos have been captured of spherical flying objects passing very close to it. 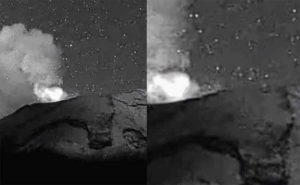