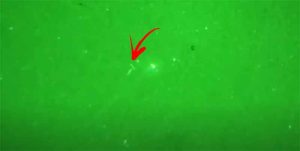 Video filmed using night equipment shows the encounter of an airliner and a mysterious T-shaped UFO.

When it comes to UFOs, everyone is interested in them these days. Everyone seems excited when they hear a report on the radio, television or on the Internet. This is because UFOs are no longer a conspiracy and people are more open than ever to discussing this phenomenon. Not only do ordinary people want to understand what these enigmatic objects are, but the government, space agencies and the military also want to find out. UFOs are a hotly debated topic, and rightly so. In recent years, a lot has changed. UFOs have been renamed UAPs (Unidentified Aerial Phenomenon) and the Pentagon and NASA have set up offices dedicated to researching these objects.

And while NASA, the government, and the Pentagon do their research, skywatchers conduct their own investigations. And sometimes someone manages to film a video of what experts ultimately consider to be real UFO evidence. This is the case of the following video, where a sky watcher has set up his equipment to observe the sky and, with a little luck, film something worthwhile. And I must say that his patience paid off.

Observing the sky with his night equipment, a man decided to film the sky. In the video, two objects are seen moving across the sky. One is what you’d expect to see, a high-flying airliner, identifiable by its characteristic shape and lights. The plane also leaves behind a trail, which is typical for airplanes. The other object is a “T” shaped UFO.

However, just behind him, another object appears. In the video, it looks like a t-shaped object or various objects moving in formation. The unidentified flying object appears to be moving above the overhead lines and is doing so at a much faster speed. On the video, it seems that the two objects almost collided in mid-flight. However, expert analysis suggests that was not the case and that the object that passed the airliner, the T-shaped UFO, was probably in space, miles away. above the airliner. Spoiler alert, the unidentified flying object was not the International Space Station.

Collision with a UFO?

So, and as they say, photos or video or it didn’t happen. Here is the video. Is this real UFO evidence?

Post Views: 100,195
Tags: A collision with a UFO in full flight? Here are authentic footage