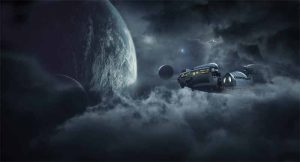 A team of physicists affiliated with several US institutions has collaborated on a paper discussing the possibility of using the Laser Interferometer Gravitational Wave Observatory (LIGO) to search for evidence of the presence of extraterrestrials piloting huge spaceships around the Milky Way. The group published their article on the arXiv preprint server.

Over the past few decades, astrophysicists and science fiction enthusiasts have become increasingly frustrated with humanity’s inability to detect the presence of life anywhere else in the universe than on planet Earth. Scientists have noticed that based on the billions of planets that have been found in habitable zones around the universe, and the fact that life exists in one place, on Earth, there should be life elsewhere too.

The problem, now called the Fermi Paradox, is that scientists have yet to find any evidence that it exists. Prominent scientists began to call for new and more exotic research methods.

Intrigued by their own idea, the researchers imagined the factors that might be involved for such a scenario to play out. First of all, they took into account the size of such a craft. They found that it would have to be very large to generate gravitational waves strong enough to reach Earth – perhaps the size of Jupiter.

It should also move very quickly – their calculations show that it moves at about 1/10th the speed of light. And it should be reasonably close – around 326,000 light-years from Earth. They note that under such conditions, if they were to occur, LIGO researchers should be able to spot the gravitational waves generated.

The researchers also note that if the aliens use warp drives, scientists on Earth should be able to spot them too, using the same technology, since such a craft would also generate gravitational waves.

Translation of Phys.org by Astro Univers

Post Views: 100,187
Tags: A team of physicists suggests that LIGO could be used to detect giant spaceships