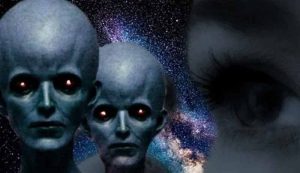 The researchers’ new paper argues that intelligent extraterrestrial civilizations would only be interested in contact with the most technologically advanced planets, and Earth does not meet these requirements.

Scientists believe that intelligent civilizations do not consider planets where there is ordinary life interesting. If life has evolved on many planets in the galaxy, then extraterrestrials are likely to be more interested in those that show signs of advanced technology, writes study author Amri Wandel, an astrophysicist from the University Hebrew from Jerusalem.

The study addresses the Fermi Paradox that, given the age of the universe, it is likely that intelligent extraterrestrials would have already developed long-distance space travel and therefore would likely have visited the Earth. Earth.

The fact that they didn’t could indicate that there is no other intelligent life in the Milky Way.

However, experts have offered other explanations for the disappearance of extraterrestrials: perhaps they visited Earth in the distant past, before the evolution of man.

Or maybe long-distance space travel is harder to achieve than you might think. Perhaps extraterrestrials have only recently reached the technological level necessary to travel to Earth. Or they simply decided not to explore space.

In his paper, Wandel suggests another possible explanation: life is actually widespread in the Milky Way. If there is life on many rocky planets orbiting the habitable zone of stars, then aliens are unlikely to waste their resources sending signals to everyone.

Intelligent extraterrestrial civilizations are probably more interested in signs of advanced technology. But technical signals can be hard to spot.

Earth has only been emitting signals detectable from space since the 1930s. the Milky Way.

Also, writes Wandel, it takes time for any return messages from aliens to be sent back, so only stars within 50 light-years have had time to respond since humanity began emitting. radio waves in space.

The results suggest that there may not be intelligent civilizations within 50 light-years of Earth, writes the scientist. But intelligent life may exist, and it awaits a technically more appealing message from us.

On the other hand, maybe it’s a good thing that no one has answered us yet. For example, the famous theoretical physicist Stephen Hawking issued a warning: humanity must be careful. He assumed that sooner or later earthlings would receive a signal from a distant planet. However, they should be careful before giving an answer. He hinted that this encounter could become similar to Christopher Columbus’ encounter with the native inhabitants of America. And we know how that meeting ended.

Post Views: 100,301
Tags: Unusual version of a scientist who explains why extraterrestrials do not come into contact with us