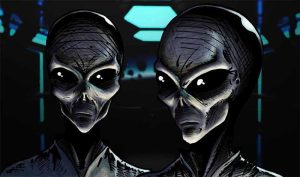 A new paper offers a new theory to explain why we haven’t heard of any extraterrestrial civilizations yet.

The question of whether we are alone in the universe remains one of the greatest philosophical enigmas of our time. While it seems almost inconceivable that our civilization is alone in the cosmos, the fact remains that we have yet to find evidence to the contrary.

The Fermi Paradox, which highlights the contradiction between the probable existence of extraterrestrial civilizations and the fact that we have never encountered them before, seems to suggest that either there are no extraterrestrials in the world, or they are so rare that it is unlikely that we will ever encounter them.

In a new paper, astrophysicist Amri Wandel of the Hebrew University of Jerusalem offers another possibility: What if life in the universe was so common that intelligent extraterrestrials were only interested in civilizations with advanced technology?

While we certainly have technology, the problem could be that evidence of it is especially difficult to detect over the vast distances between inhabited worlds.

While megastructures orbiting stars would be detectable over long distances, the kind of technology we have might not be, especially since we only emit radio waves (which can only travel at the speed of light) only for a relatively short period of time.

Unless someone in our galactic neighborhood, a few dozen light years away, is listening for such signals, they are unlikely to be aware of our technology.

It may also be that our technology is simply too primitive to be of any use.

In Star Trek, the United Federation of Planets refuses to make first contact with a civilization until it has reached a certain level of development (i.e. a warp engine).