A new theory about the origin of Oumuamua, believed by many to be the first sign of extraterrestrial life.

Astrophysicists from Arizona State University presented a new study on the mysterious origin of the very first interstellar object – Oumuamua. What some astronomers thought was an alien spacecraft has now been identified as a fragment of a Pluto-like planet.

Until now, scientists around the world have debated where Oumuamua came from and what exactly he was. Unfortunately, planetary scientists discovered it too late, which prevented them from conducting serious observations.

Many scientists have referred to it as spacecraft or extraterrestrial debris. For example, the famous astronomer Avi Loeb, professor at Harvard University, recently published the book “Aliens: The First Signs of Intelligent Life Beyond the Earth”.

In this book, Oumuamua is presented precisely as an extraterrestrial technology and, to be honest, the explanation he gives of his theories is quite convincing although he does not provide sufficient proof (it simply does not exist not).

In a new study, astrophysicists Stephen Desch and Alan Jackson provide a fundamentally different explanation for the nature of the mysterious object. They analyzed the data obtained during the observations and identified several new features.

Have scientists solved the mysterious origin of Oumuamua?

Scientists drew attention to the speed of this body – the object entered the solar system more slowly than models predict. This indicates that he traveled through interstellar space for up to a billion years. Moreover, its shape was much flatter than that of any other known object in the solar system.

Also, Oumuamua was strongly influenced by the Sun. The object began to accelerate, and this “repulsion” was more powerful than could be explained. At the same time, the object did not have the typical “tail” of comets. 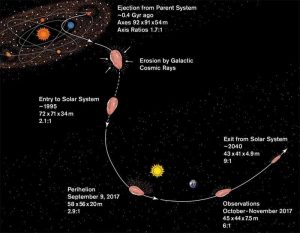 With all of this in mind, Desch and Jackson speculated that the mysterious object might be composed of dissimilar ice. They calculated how quickly these ices should sublimate (change from solid to gaseous state) during the passage of Oumuamua in front of the Sun. They also calculated the repulsive force, mass and shape of the object, as well as the reflective power of the ice (albedo).

The data obtained by the astrophysicists was then compared to the characteristics of various ices and came to the conclusion that only one form of ice – solid nitrogen – fits the given model. Such matter is familiar to scientists since it has been observed on the surface of Pluto. Therefore, the authors of the work believe that Oumuamua could be made of exactly the same material.

The researchers also calculated how quickly chunks of solid nitrogen ice could break off the surface of Pluto and similar bodies during the formation phase of our solar system. They concluded that Oumuamua may have been part of a planet similar to Pluto but located in another star system.

By the way, the authors of the work believe that this object originally had a different shape, resembling a cookie, but then thinned out when the outer layers of ice burned off.

In all honesty, this new study does not, once again, provide enough evidence for us to consider the mystery solved. Scientists are undoubtedly presenting a new possible explanation, but that’s where it ends. The sad truth is that we’ll probably never find Oumuamua’s true origin or have a better idea of ​​what exactly she looked like. The observations were simply several months late.