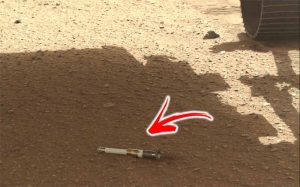 NASA’s Perseverance rover has dropped a titanium tube containing samples collected from Mars. The tube resembles a lightsaber from the Star Wars franchise. The Mars Sample Return mission is expected to retrieve 17 sample tubes from Mars and return them to Earth.

NASA recently revealed new photographs taken by its state-of-the-art Perseverance rover. Unlike the usual photos of the Martian landscape, we see a photo taken from below the rover. There, on the reddish Martian soil, we see a small object that looks a bit like the famous lightsaber from Star Wars. While obviously not one, this object is of extreme importance to Mars, Earth, and future space exploration. The lightsaber-shaped titanium tube was dropped there on Dec. 21 by the rover. And this is just one of the many objects it will deposit on the surface of the red planet.

Over the next few months, NASA has revealed that Perseverance will deposit nine more tubes on an area called ”  Three Forks  “, the first sample preparation from another planet. Since landing, Perseverance has done some fantastic science on Mars. He took several samples from different Martian objects. In total, in his belly, Percy holds 17 samples (as I like to call them, lightsabers), one of which is not from the surface but from the atmosphere of Mars.

This is all going according to plan and is part of the Mars Sample Return Mission, also known as MSR. The rover is supposed to deposit a series of samples intended for a future lander. The latter will in turn use a specially designed robotic arm to place the samples collected by Percy in a containment capsule. This capsule will be part of a rocket that will then fly into orbit. There, another spacecraft will capture the container on the surface of Mars and then return to Earth, where the samples will be deposited for scientists to examine more closely.