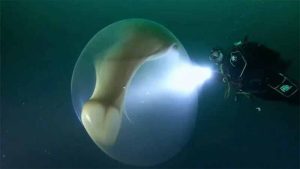 Experts have found mysterious gelatinous spheres that have completely baffled them. For now, they are believed to belong to the squid Illex coindetii, known as the “red squid”. 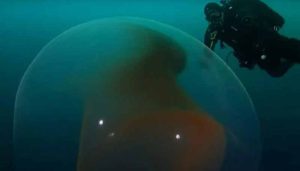 Up to a hundred gelatinous spheres have been found on the seabed, surprising expert divers over the years.

Scientists have tried to decipher the origin of these huge objects, but they remain an enigma for mankind.

Gelatinous spheres: what are they?

The journal Scientific Reports has published a theory that some believe these may be ‘mystery eggs’.

He explains that these are egg sacs of the squid Illex coindetii. Their discovery was made possible thanks to the collaboration of citizens, as well as the DNA they were able to analyze from the tissue.

They have been found in the Mediterranean Sea, as well as off the coast of Norway, surprisingly measuring over a meter in diameter.

Another unique feature is that they are nearly translucent, with a dark band running through the center, but not allowing the interior to be seen.

A few years ago, the director of the marine zoological organization Sea Snack Norway, Halldis Ringvold, started a campaign to get the attention of the public, especially divers.

The project planned to collect small tissue samples from the gelatinous spheres for analysis.

In 2019, several divers took up to 4 different tissue samples from the large objects. They collected them in plastic bottles and stored them in ordinary refrigerators.

The study revealed that none of the gelatinous spheres were damaged. She revealed that they were large balls containing hundreds of tiny Illex coindetii eggs. 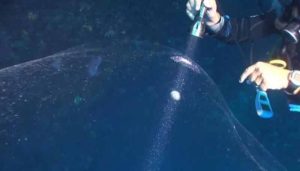 This mollusk has been known for 180 years and is commonly found in the Mediterranean and the Atlantic.

These short-finned squids have ten tentacles and are carnivorous and very voracious, with accelerated growth and do not live for more than a year.

In the same study, experts were able to see what was inside these eggs. They say they found “squid embryos at four different stages.”

The researchers also discovered that the sphere changes consistency, going from firm to transparent, then to broken and opaque, as the embryos develop.

The eggs are made up of a gelatinous substance that allows them to float between the surface and the bottom of the sea. This helps keep the embryos safe.

As for the strange dark band, the researchers believe it is a river of ink that the female leaves behind after fertilizing the eggs. These could signal the degree of maturity of the eggs – the more pronounced they are, the greater the maturity. Although some think it could also be a kind of camouflage.

Despite what the study says, the mystery of the gelatinous spheres remains, as no one has seen a squid leaving its eggs on the seabed. So this is just one more theory.

Post Views: 100,494
Tags: Mysterious gelatinous spheres on the seabed: experts don't know what they are