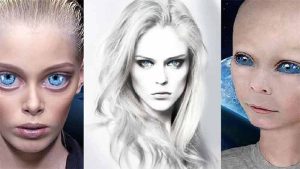 The Tall Whites are often confused with the Pleiadians, due to the limitations of human understanding, but they are very different. Charles Hall, a US Air Force veteran, says the US military has had contact and worked with this extraterrestrial race, called Tall Whites, since the 1950s.

Charles Hall describes these beings as over 2.5 meters tall and humanoid in appearance. They have blond and white hair and a strong muscular appearance.

They all have a white complexion. Their skin is completely white, like chalk. Their hips are the same shape as ours, but they walk very differently because they are used to a stronger force of gravity.

They are usually clad in aluminized suits and can live for up to 800 years. They don’t age like us, but around 400 Earth years they go through a second phase of growth and eventually reach a size of about 2.5 meters.

They are extremely intelligent and process information several times faster than humans. They have different individual talents, intellectual abilities and physical characteristics.

Although their technology is far superior to ours at the present time, there is every reason to believe that, according to other less tangible criteria, such as “wisdom”, “intelligence” and “morality”, they could be quite comparable to us.
These extraterrestrial beings usually communicate using telekinesis and telepathy. What’s interesting about them is that, according to Charles Hall, they have 28 teeth and their blood cells are biconvex in shape, unlike humans, who have concave blood cells.

The sleeping pattern of Tall Whites is also different from that of humans. Several times faster than humans. They have different individual talents, intellectual abilities and physical characteristics.

On their planet, the days are longer, and they usually stay awake for two Earth days, then continue to sleep for the same amount of time.

Their ultimate home may be elsewhere. In a recent lecture, here is what Charles Hall said: “I could never determine what the Tall Whites called their star. » 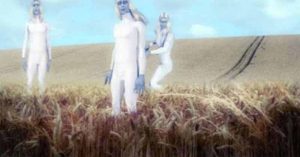 My best guess, however, was a star, which is about 105 light years away. Hall’s “best estimate” was probably an excellent estimate, as he had been able to decipher the transit times of the route from very careful observations of the various vessels and their schedules.

Many people report seeing or encountering these very white beings nowadays, but what is very interesting is that there are many documents in our history that also suggest the existence and visitation of these extraterrestrials on our planet thousands of years ago.

Throughout history, many cultures claim to have had encounters with white beings from the sky. Various myths and stories described them as tall, thin people with white skin, blue eyes and white hair.

In South America, the Viracochas described them as white masters of the skies. According to the Incas, the white masters shared the teachings of astronomy, calendar, craftsmanship and spirituality.

In Persian mythology, the name Ahura Mazda also means “Spirits of wisdom”. It is said that Ahura Mazda shared his teachings with the locals.

They were described as white spirits, which flew in luminous disks. Similarly, in America, the Hopi Indians encountered the Pahana. Pahana means white brother from heaven. It is said that the white brothers transmitted spiritual knowledge of a philosophical nature to the natives.

Even today, the Hopi Indians await the return of the Pahana, their true white brothers. Moreover, in Indian country, the name Vayu, has the meaning of the white gods of the wind.

According to ancient Sanskrit literature, he described a world filled with ancient flying vehicles called Vimanas. This huge device is said to be mind-controlled and a chariot of the gods from the heavens.

We can find many depictions of their spaceships in ancient drawings. For Moses, the spaceship was the residence of God, and the rest of the crew were the angels of God.

Tall Whites spaceship technology has been featured throughout history. Charles Hall described three different types of spacecraft, ranging in size from a small nuclear-powered scout ship to a large interstellar craft capable of traveling faster than the speed of light.

This large black ship was about 20 meters high and 110 meters long. According to Hall, the technology for the small ship has been shared with the military, but the large ship remains a mystery. That’s what Charles Hall said, regarding his shed and living quarters.

“I was able to observe the repair facilities from a great distance and as far as I know I was the only person who was allowed to see these facilities.

“The American generals, they would do anything to maintain good relations with the White Tops, in order to obtain their technology. “The exchange was on the basis of what could benefit the High Whites, and sometimes they participated in classified meetings helping with technological development. »

Charles Hall says he has seen them together on several occasions, and they have even sat together at negotiation tables.

Hall said the military certainly provided Tall Whites with any type of food requested, but he noticed they were carrying prepared bags of what looked like mushroom pudding. Hall, assumed they were herbivores, as he noticed them picking seeds on several occasions.

It is also rumored that President Eisenhower had a secret meeting with a group of Tall White aliens who were trying to convince the United States to disarm its nuclear missile program in exchange for advanced technology.

The event is said to have taken place in February 1954 at Edwards Air Force Base under President Eisenhower. Eisenhower had to excuse his absence by having emergency dental surgery, which of course was a lie and an attempt to cover up.

It is believed that this meeting did not lead to any agreement. Instead, Eisenhower is believed to have signed a treaty with the Gray Extraterrestrials, a pact that ensured the United States could maintain its nuclear arsenal while receiving advanced technologies from the extraterrestrials.

In exchange for this advanced technology, the Grays could abduct and experiment on the American people without question.

Mr. Charles Hall said the Tall Whites posed no threat to humans and were primarily engaged in technology transfer with the US military.

“They were housed at the base and only used Earth as a base for their deep space travel, and had no motivation to colonize our planet or dominate national governments.

On October 21, 1954, when Jessie Rosenberg left her home in the West Midlands, England, Ms Rosenberg, then 29, was out to investigate a strange whistle that was troubling her.

Outside, her two children are lying on the grass. They were in shock, screaming that a flying saucer was above them. It was then that Ms. Rosenberg saw and described the craft as a “Mexican sombrero”, hovering over her house.

It was then that she saw two blond humanoid figures watching her from a viewing window on the ship. All she could do was look back in disbelief.

The sighting in the West Midlands has been told and studied for over half a decade. At the time, none of the witnesses deviated from what they claimed to have seen on that day in October 1954.

Post Views: 101,438
Tags: The Tall White Extraterrestrials: “They Are Among Us”