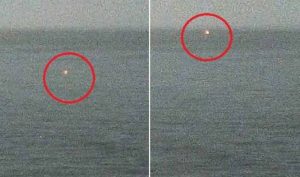 A surveillance camera placed on the beach of Encinitas, California (United States), recorded a mysterious object which moved at very high speed on the surface of the water, at low height or under water.

The images show that an object resembling a point of light suddenly appears near the coast and moves in a straight line, at an incredible speed for a boat or other vessel, towards the horizon.

At some point, the point disappears, but it ignites again and becomes even brighter than at the beginning. Then it completely disappears.

The video also shows incomprehensible white flashes in the same area where the bright UFO was. What it is is unclear.

And these are not all the mysteries associated with this video. According to the author who posted it on the Internet, the next day this webcam was turned off, and the original recording from the day before, where a mysterious object was seen, was completely removed from the archives.

The beautiful bluish glow in the second part of the video is plankton bioluminescence, not associated with a mysterious object. This is a fairly common phenomenon in the region.

According to many commentators, if this object is not an alien underwater probe, it is most likely some kind of secret military drone.

Although why he was in such an open public place equipped with webcams is an interesting question.

Post Views: 100,499
Tags: A UFO moving at high speed in the water caught on surveillance camera