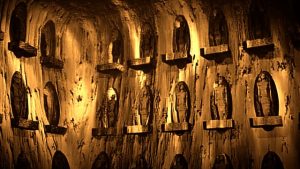 Sensing a final opportunity for adventure, explorer G.E. Kincaid took a boat down the Colorado River and through the Grand Canyon. The canyon was rich in minerals like gold, silver and copper and Kincaid wanted to see what he could find before the area was closed off for good.About 40 miles up-river from the El Tovar Crystal canyon, Kincaid saw stains in the sediment formation about 2,000 feet up. He tied off the boat and got out to investigate.

Kincaid couldn’t find a trail, but after a short hike he found something interesting covered in desert brush. Steps. Hundreds of them. Carved in sandstone. Steps that wound their way up to a high shelf on the side of the canyon.

He followed the steps until he came across a cavern entrance. An entrance that was clearly man made.

Kincaid entered the cavern and turned on his flashlight. On the walls he saw writing. But it wasn’t English or Native American writing. It was Ancient Egyptian Hieroglyphics.

Kincaid lifted his flashlight and saw that the tunnel ran far into the distance. He didn’t realize it at the time, but this was only the beginning.

Interesting to know that Smithsonian denies the story of the Ancient Egyptians and Giants in the Grand Canyon and they came up with the following explanation in an attempt to debunk the story.

Smithsonian: Backstory: On April 5, 1909, the Arizona Gazette ran the following headline: “Explorations in Grand Canyon; Mysteries of Immense Rich Cavern Being Brought to Light; Jordan Is Enthused; Remarkable Find Indicates Ancient People Migrated from Orient.” The article includes testimony of one G. E. Kincaid who says that he, traveling solo down the Green and Colorado Rivers, discovered proof of an ancient civilization—possibly of Egyptian origin. The story also asserts that a Smithsonian archaeologist named S. A. Jordan returned with Kincaid to investigate the site. However, the Arizona Gazette appears to have been the only newspaper ever to have published the story. No records can confirm the existence of either Kincaid or Jordan.

In the following video ‘The Why Files’ provides a detailed explanation and analysis on this possible archaeological cover-up.