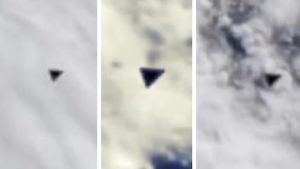 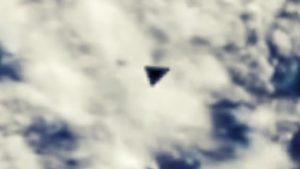 Above, three black triangular shaped UFOs was caught on the ISS live feed cameras. The date is unknown.

Are these Astronauts in any danger or is there a risk of the UFOs hitting the ISS because these looked out of control to me. I’d hate to be that voice of reason only for something terrible to happen? It’d be a “I told you so” in fact anyone and everyone who’s ever mentioned that there’s UFOs caught on the ISS live feed, they could all say “we told you so” and NASA wouldn’t even bat an eyelid.

It would be covered up or not even mentioned by NASA until a plausible excuse could be dreamed up. There’s a reason why we don’t ever hear about anything going wrong at NASA even though it’s a research and development centre!

Most thing’s (advances in technology and science) have what’s called “happy accidents” where breakthroughs occurred from an accident. I can honestly say that I haven’t heard about any accidents at NASA, ever! Have you, ever heard of anything going wrong or stuff like that?

No wonder we don’t hear anything about UFOs.

Anyway, we see three UFOs coming into the screen from the left hand side of the screen and the camera was running live but because of the speed in which these amazingly shaped UFOs just fly through the screen the NASA “engineer’s” don’t have time to react or press the green square button that cuts the screen.

There must be a cheap deal on at the space warehouse selling black triangle spacecraft’s? Buy one, get two free!

You might remember this screenshot from a few years back? 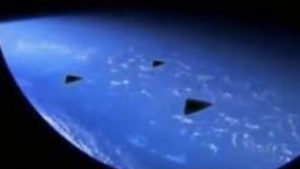 You probably do remember the screenshot of the three black triangles which was caught on camera flying past the ISS about a decade ago?

In fact here’s another image from the 1969 Apollo launch from when the space agency was rehearsing launch procedures and a black triangle can be seen among the clouds. Don’t forget it’s an “allegedly” because it’s a real NASA image but is it a camera speck? The black triangle UFO is in a photo from a practice run for the Moon landings: 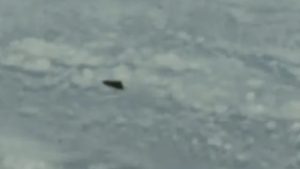 A 1969 NASA photo of a practice run for the Moon landing.

If you’ve got any thoughts on this or you’ve seen something similar to this UFO sighting then please share it with us in the comments section below, cheers. Also please don’t forget to share this post, thanks.