The Sun is a mysterious place; our main star has caused so much controversy within different communities, especially in the field of ufology. Today, a moon-sized UFO was spotted orbiting the Sun and believed to have been there for over a year. 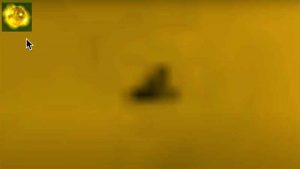 A mysterious black triangle has been captured, not only on the surface of the Sun, but experts say it could be over a year old.

A UFO near the sun present for more than a year

The strange unidentified flying object has dimensions close to those of the Moon, as shown in a graph by Helioviewer.

The YouTube channel, UFO Sightings Daily, was tasked with publicizing the recent discovery. The outlet tried to get a response numerous times through official NASA Twitter accounts. However, they received no response.

It is not yet known what it really is, but its triangular shape suggests that it is an unknown spacecraft. Most likely of extraterrestrial origin.
As he explains in the video, the UFO has been there for a long time, possibly for over a year. It was recorded by 4 different NASA cameras, is black in color and generates no heat, demonstrating advanced technology capable of staying cool when brushing against the surface of the sun.

The strangest thing is that the object always returns to its initial position, which gives it a privileged and constant view of the Earth. 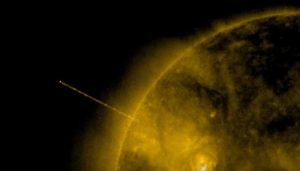 Other strange phenomena on the surface of the Sun

It should be noted that this is not the first time that a UFO has been sighted on the surface of the Sun. In fact, mysterious objects have been captured absorbing its energy.

In March 2016, the SOHO space probe, which has been studying the Sun for decades, captured enigmatic photos.

The images revealed the presence of a strange object orbiting the star to feed on it.

It should be noted that something similar happened in 2012, when a video appeared on YouTube showing a giant black sphere “connected” to the Sun by strange filaments.

The sphere was visible for almost 80 hours, from March 9 to 12. When it disappeared, it left behind a series of solar flares that didn’t subside until nearly six hours later.

The US space agency declined to comment on what happened now, six years ago or in 2012. Some users suggest it is space junk, but being so close to the Sun, it seems impossible.

Post Views: 100,935
Tags: Moon-sized UFO could have been orbiting the Sun for a year