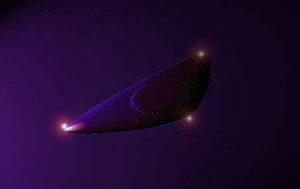 A resident of the United States had the unusual surprise of seeing a large UFO consisting of three bright lights in the shape of a triangle above Washington.

It’s hard to explain logically what it is, because in Washington, we are very strict about launching drones (at least civilians).

In some cities across the state, any such launch is expressly prohibited, and the District of Columbia is special closed airspace.

In addition, people write that if anyone tries to violate this ban, he will face the launch of military aircraft tasked with intercepting him, and subsequently a very serious trial. So most likely it wasn’t a civilian drone.

As for the fact that it could be a military aircraft, or even some kind of secret military drone, then the question arises as to what it was able to do in the skies of Washington and how it got there. able to move completely silently. Some kind of very advanced technology?

Many people believe that this video is real and write that they themselves have seen something similar in the sky, especially in New York, Virginia, Florida and other American states.

A version has been proposed that it was a reflection of something projected from the earth, but this was refuted, stating that one could then see a beam going into the sky from the source of the projection.

The most popular assumption for all these videos with lights in the sky is that they are simply Chinese lanterns. But towards the middle of this video, we can see that the three lights disappear in the sky almost simultaneously. Three Chinese lanterns disappearing at the same time?