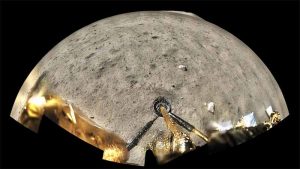 Magnetic anomalies on the Moon have been a mystery since the Apollo-era missions, and their origin is still debated to this day.

One of the most important missions to the Moon, apart from Apollo of course, is the China Space Agency’s Chang-e 5 mission, as part of China’s lunar exploration program. It was China’s fifth exploration mission and the first to bring samples of the Moon’s surface back to Earth. The material brought back to be studied on Earth has allowed us to considerably improve our understanding of the Moon and even to solve some mysteries. Like, for example, lunar magnetic anomalies. Today, a microanalysis of iron sulfide samples brought back from the Moon by China’s Chang’E-5 mission confirmed, for the first time , the presence of impact-induced submicroscopic magnetite.

In planetary science, magnetite is essential for answering questions about ancient magnetic fields and indicators of life. A traditional concept of the Moon is that it is extremely small. This indicates that metallic iron rather than iron oxides formed on the lunar surface due to its oxidation state.

Although some studies have predicted the widespread presence of magnetite crystals in lunar soils during the Apollo era, no other in situ evidence of magnetite crystals in lunar soils has been found. In lunar soil, native magnetite may be widely distributed, based on this first discovery of impact-induced sub-microscopic magnetite. Moreover, the origin of lunar magnetic anomalies remains a mystery, and has been since the Apollo era. It has only been previously established that large impact ejecta and magnetic anomalies are related, but not how material is transformed during impact. The study was published in Nature Communications .