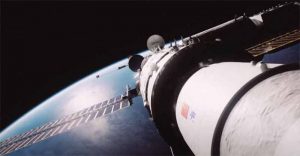 China’s new space station is now configured with three modules and three spacecraft and a total of six occupants.

Shenzhou-15, carrying three astronauts, docked with China’s space station just over eight hours after takeoff. A taikonaut is a person who travels in space for the Chinese space program; a Chinese astronaut. This is the first rotation of a Chinese crew in orbit, which has brought the number of employees of the space laboratory to six. The hatch was opened by Chen Dong, the crew commander of Shenzhou-14, at 23:33 UTC on November 29. The space station is called Tiangong, which means “palace in the sky”. Its mass is about a fifth of that of the International Space Station. This space station is what is called a third generation modular space station.

China’s space station is still worth the trip

Xinhua reportsthat the three occupants of the space station – Fei Junlong (commander), Deng Qingming and Zhang Lu – greeted the newcomers with a hug, then took a group photo with a thumbs up while saying: “The Chinese space station always worth the trip”. During docking, Shenzhou-15 was connected to Tianhe, the space station’s core module. Thus, the space station is now configured with three modules and three spacecraft, weighing a total of almost 100 tons. To carry out the scheduled tasks and transfer work, the six taikonauts will live and work together for about five days. The new crew members of the Tiangong space station will spend six months in orbit fine-tuning the space station after the mission is complete.

Among its many mission objectives, the taikonauts will attempt to reproduce monkeys in weightlessness. While in orbit, taikonauts from Shenzhou-15 will witness the arrival of the Tianzhou-6 cargo spacecraft and the Shenzhou-16 manned spacecraft. Additionally, a handover will take place with the next Shenzhou-16 crew in orbit. After the successful launch of Shenzhou-15, China sent 16 astronauts into space, while the search for the next group of space explorers continues.