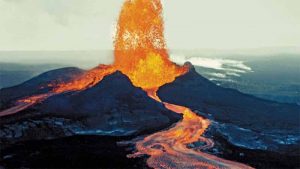 The goddess Pele woke up from a long sleep: Mauna Loa, the largest active volcano in the world, erupted in Hawaii. 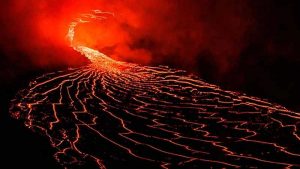 For the first time since 1984 and just in time for Hawaii’s Independence Day, the Mauna Loa volcano has woken up, and authorities such as the United States Geological Survey (USGS) are advising residents of the island to stay vigilant.

As the USGS Hawaii Volcano Observatory notes in an update, the threat level has been raised from “alert” to “warning”, although “lava flows are contained within the summit area and do not threaten not yet the communities living on the hills”.

“However, based on past events, the early stages of a Mauna Loa eruption can be very dynamic, and the location and progression of lava flows can change rapidly,” the report adds.

People downwind of the eruption are at risk of exposure to a number of ‘projectiles’, including volcanic gases, fine ash or ‘Pelé’s hair’, the strand-like glass fibers that sometimes result from eruptions and are named after the goddess of the volcano.

As Hawaii’s National Park Service (NPS) points out, the world’s largest active volcano erupts once every five years. He has done so 33 times since 1843, when the islands gained independence from Britain and France.

Yet its last eruption was 38 years ago, which until this weekend was the volcano’s longest period of calm since written records exist.

That said, the USGS expects the eruption to remain contained within the summit Moku’āweoweo caldera this time around.
“However, if the eruptive vents move away from its walls, the lava flows can move quickly downwards,” adds the government warning. It’s been a long wait and hopefully the eruption will remain a fascinating geological curiosity and not trigger tragedy.

Post Views: 100,234
Tags: The largest volcano in the world has erupted