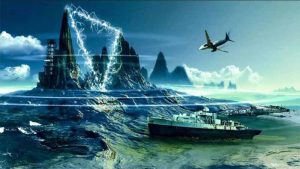 In certain regions of the Earth, there are specific places where mysterious and unexplained disappearances of people, ships, even planes are observed. Among them, the Bermuda Triangle stands out. However, there are other unexplained cases. What is the mystery of the Great Lakes Triangle? 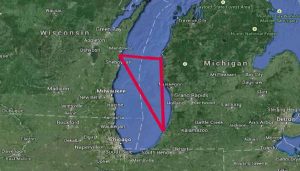 The mysterious Great Lakes Triangle is a phenomenon that has yet to be explained. In the United States, these 5 bodies of water have strange anomalies that have caused the disappearance of thousands of people.

Lake Michigan is the only one of the five freshwater Great Lakes to be found within the territory of the United States. The other four are shared with Canada.

Its area is 57,750 square kilometers. It is the largest freshwater lake in the country and the fifth largest lake on the planet. Its deepest point reaches 271 meters and is about 175 meters above sea level.

However, Lake Michigan is not just one large body of water. It is also part of one of the most important enigmas on the planet. Many disappearances of people, ships and planes have taken place there. Also, many UFO sightings have been reported in recent years.

The mysterious incidents indicate that the effects occur in a certain area, enclosed in a kind of triangle. This is called the Great Lakes triangle, in reference to the famous Bermuda triangle.

Probably the most famous Great Lakes case is the disappearance of Northwest Airlines Flight 2501, which took off from New York for Minneapolis in June 1950.

While flying over Lake Michigan, it crashed for no apparent reason, killing everyone on board. To make the case more bizarre, the wreckage of the plane or the crew has never been found.

What surprised the authorities the most was that the plane was a DC-4, a turboprop with 4 powerful engines. This aircraft had the ability to overcome severe shocks and difficult situations. Also, it could lose up to 2 engines and still be operational.

Other strange occurrences involve UFO sightings. The number of cases is such that the US Federal Aviation Administration has created a special service to catalog reported sightings in the region.

UFOs and other disappearances 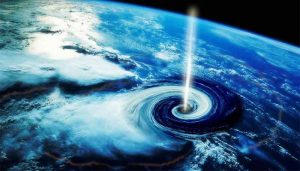 Many of these objects are seen sticking out of the water, so experts believe they are actually UFOs. Specialists believe that these anomalies and disappearances are linked.

Another case is the disappearance of the schooner, which disappeared without a trace during a storm on May 21, 1891.

He was sailing from Chicago to Muskegon, Michigan, and his mission was to salvage a cargo of lumber. Seven crew members, including Captain George C. Albrecht, disappeared with the ship. Searches were carried out throughout the area, but no wreckage was found.

Ancient sailors said the schooner was a wooden ship that could not sink without leaving floating debris. But even today, the case is still not resolved.

Another anomaly is that of the “ghost” planes that appear on the radars of O’Hare International Airport. This airport is responsible for monitoring air traffic in the region.

The signals appear and disappear without explanation. According to experts, they are not due to defects, since they are periodically checked. Some theories suggest that the planes might actually be “time-lost” planes or UFOs.

Experts suggest that a phenomenon described by Albert Einstein is likely to occur at the site. The so-called “wormhole” or “Einstein-Rosen bridge”.

They would be interdimensional portals connecting our world to another world in a galaxy located thousands of light years away. This could be used by advanced civilizations to move around the universe.

However, wormholes remain hypothetical, and there is no evidence that they can exist. Much less in our world. Thus, the Great Lakes triangle remains a mystery.

Post Views: 100,393
Tags: The Great Lakes Triangle: The Most Abnormal Place on Earth?