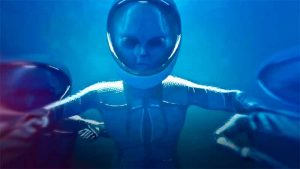 Russia harbors a number of enigmas and mysteries, each stranger than the next. The following case, concerning Lake Baikal, is no exception: are there giant humanoids in the deep lakes of this frozen country? 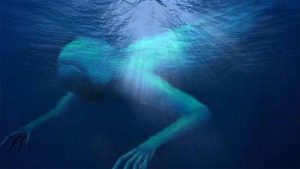 It is said that in 1982, during a training exercise for “frogmen” in Lake Baikal, divers encountered a strange group of underwater “bubblers”.

These aquatic humanoids are huge (over 3 meters tall) and, although they swim in icy waters, wear only skin-tight silver jumpsuits.

Although the beings were seen at a depth of over 45 meters, none of them were wearing any diving equipment. They had only sphere-shaped helmets to hide their heads.

This encounter is said to have prompted Soviet military leaders to attempt an expedition to catch any or all of the humanoids underwater, and a party of seven frogmen was sent to the area.

“As the frogmen attempted to cover the creature with a net, the entire team was propelled out of the deep waters to the surface by a mighty force.

Since the divers’ self-contained equipment does not allow them to ascend to the surface from such depths without strictly adhering to the decompression arrest process, all members of the ill-fated expedition were struck down with decompression sickness. .

The only curative treatment available was immediate confinement under decompression conditions in a pressure chamber. They had several pressure chambers like in the military district, but only one was in working order.

It couldn’t hold more than two people. These local commanders had forced four divers into the chamber. As a result, three of them (including the group commander) perished, and the others were crippled”.

As a direct result of this incident, General V. Demyanko, the commander of the Buso military service of the USSR, was transferred to the Issik Kul military base to inform local officials of the dangers of attempting to capture humanoids under -giant sailors. 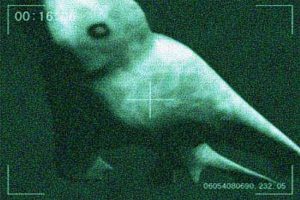 This proves that the Soviet high command was well aware of the presence of such creatures in Lake Baikal and in Issik Kul.

Would an order not to capture them have been issued if the creatures weren’t real?

Shortly after, the engineering forces of the Ministry of Defense issued a bulletin addressed to the headquarters of the military region of Turkmenistan.

The bulletin mentions many other lakes where sightings of similar aquatic humanoids have been reported, as well as the usual flying discs and spheres rising and diving in the depths.

This leads us to believe that the Lake Baikal and Issik Kul incidents were not singular events, but rather an expression of a much larger phenomenon.

The veracity of this incident is supported by the confession of the Russian writer Mikhail Demidenko. After learning about Shteynberg’s account in 1992, Demidenko recalled spending some time on Lake Baikal in the mid-1980s, as part of a mission from the Writers’ Union of the USSR.

It was there that fishermen from Irkutsk told him how they saw Soviet divers being thrown out of the water and continuing their ascent to a height of 9 to 15 meters above the surface.

The fishermen did not know about the episode of the underwater humanoids and wondered why the Soviet army subjected its divers to such tests.

So, is this case definitive proof that Russian lakes are home to a race of giant aquatic humanoids? This is not enough, because more tangible evidence is needed.

But the persistence of legends and the confessions of retired high-ranking military officers like Colonel Vladimir Azhazha seem to suggest that something lurks in the uncharted depths of our planet.