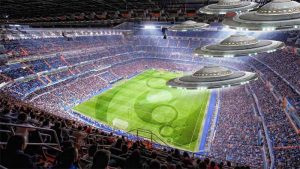 The origin of Unidentified Flying Objects (UFOs) is still unknown to researchers. 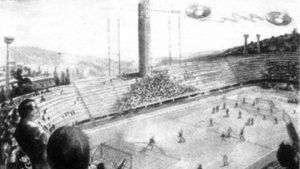 Throughout history, several sightings of this type of unidentified objects have been known on different occasions, such as the night of May 19, 1986, when 21 unidentified flying objects, some of which reached 100 meters in diameter, were sighted. in Sao Paulo, Rio de Janeiro, Minas Gerais and Goiás.

This event is not the only one: a football match is known to have been suspended due to a UFO sighting some 66 years ago, as reported by “Tyc Sports”.

On October 27, 1954, in Florence, Italy, the teams of Fiorentina and Pistoiese faced each other at the Artemi Franchi stadium. At least 10,000 spectators attend this encounter, many of whom claim to have seen UFOs flying in the sky, as reported by the aforementioned media.

A football match VS the presence of UFOs

The second half had barely begun when the noise of people cheering on their team quieted down, the shouting and chanting stopped. Within seconds, all that was heard was the murmur of people staring at the sky in astonishment. 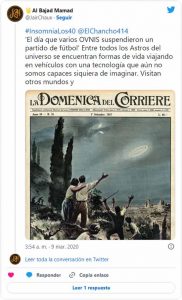 The referee decided to suspend the match when he saw the flying objects and realized that everyone was focused on them.

Former Italian footballer and manager, Ardico Magnini, considered a legend of European football, told in an interview how he felt that day, when reality stopped and myths started to take hold. life.

“I remember everything from A to Z. It was something like an egg moving slowly. Everyone was looking up and there was something shiny in the sky, shiny silver. We were amazed, we had never seen anything like it in the sky. We were shocked,” Mr Magnini told the BBC.

But it wasn’t just the players, fans also talked about the strange but amazing moment during the game. This is the case of Gigi Boni, a faithful supporter of Fiorentina.

“They were moving very fast, then they stopped. This all only lasted a few minutes. I could describe them as Cuban cigars. They reminded me of those cigars by the way they looked,” he reportedly said.

Boni also remembers that what he saw hovering in the sky that day were aliens: “I think it was aliens. That’s what I believe, there is no other explanation that comes to mind.

The unexplained appearance and disappearance of UFOs 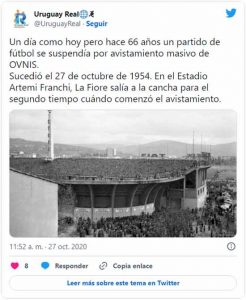 After all the spectators fixed their gaze on the sky, several of them claimed to have seen a beam of white light coming from the town of Prato, north of Florence, reported the Florentine daily “La Nazione”.

“At that time, the newspapers were talking about the Martians. Of course, we now know that is not the case, but we could conclude that it was an intelligent phenomenon, a technological phenomenon, a phenomenon that we cannot relate to something that we know to be on Earth,” said Roberto Pinotti, president of the National UFO Center, as quoted by the aforementioned newspaper.

Besides the presence of alleged extraterrestrials, the sky was also accompanied by a sticky white substance, described by several witnesses, but which, like the objects which remained there for several minutes, became strange and confusing to the man.

“It is a fact that when the UFOs were seen over Florence, a strange sticky substance fell from the sky. In English, we call it ‘angel hair’,” says Pinotti.

No expert or researcher could give an explanation on a possible link between the substance and the alleged UFOs that appeared that day.

Some described it as a big cotton ball, others said it looked like artificial snow. But the truth is that no one, with certainty, could give an answer.

Post Views: 100,899
Tags: The football match that was interrupted due to the arrival of 21 UFOs