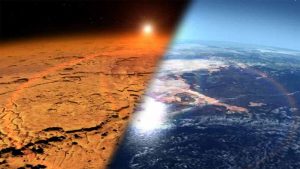 Water and organic molecules were brought to Mars by ice asteroids during its early stages as a planet. According to scientists behind a groundbreaking study, Mars may have been home to the first life in our solar system.

We call Mars the red planet. However, Mars was once blue and covered in water, which brings us closer to discovering possible life on this planet. There is no doubt that water existed on Mars, but the question of how much water could have existed is still debated. According to new research from the University of Copenhagen, there was enough water on the Red Planet 4.5 billion years ago to cover the entire planet with an ocean 300 meters deep. Around this time, Mars was bombarded by ice-filled asteroids. This happened during the first 100 million years of the planet’s evolution. Professor Martin Bizzarro, from the Center for Star and Planet Formation, notes that asteroids also carried organic molecules essential for life.

DNA and RNA form bases from amino acids that contain all the components necessary for cell function. New research indicates that the ocean covering the entire planet was at least 300 meters deep. Their depth could reach a kilometer. Martin Bizzarro explainsthat the Earth has very little water in comparison. This phenomenon occurred during the first 100 million years of Mars’ existence. Life on Earth experienced a catastrophic event after this period. According to some theories, the Earth collided with another planet the size of Mars. During this collision, all life on Earth was wiped out, which led to the formation of the Earth-Moon system. In other words, it is very likely that Mars supported life long before Earth, according to scientific evidence.

An ancient piece of Martian crust

In order to study the past history of Mars, the researchers used a billion-year-old meteorite. Originally part of the Martian crust, the meteorite offers unique insight into the formation of the solar system. Since Mars’ surface doesn’t move, the secret is hidden in how the planet’s surface was created – which once included the meteorite. The opposite is true on Earth. The planetary tectonic plates are perpetually in motion and recycled. During the first 500 million years of our planet’s history, plate tectonics erased all signs of what happened. Inside our planet, the plates are continually in motion, being recycled and being destroyed. In contrast, a plate tectonic system does not exist on Mars.

Post Views: 100,166
Tags: Did Mars host the first forms of life in the solar system?