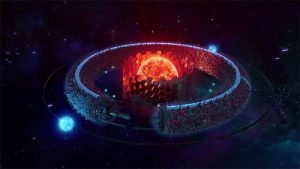 The universe is so vast that it is hard to think that Earth is the only world that harbors life. What if, somewhere, hyper-advanced aliens existed?

Outer space is an amazing place. The universe we live in is full of mysteries. Galaxies, solar systems and distant stars. Strange worlds, some of which are larger than the largest planet in our solar system. Black holes are there too. There are dormant black holes and active black holes, and we recently found the closest black hole to Earth. The more we look into space, the more surprised we are. This is because we know very little about the universe. But we learn at a rapid pace. In this journey, the James Webb Space Telescope helped us a lot. It revealed and helped us understand what some of the early moments after the Big Bang were like, and when the first galaxies and stars formed.

But there are more mysteries than distant black holes in distant galaxies. Some of these mysteries orbit distant stars. Many things can revolve around stars, for example. Planets -exoplanets- are the most common. To date, we have found over 5,000 alien worlds. But other things can also revolve around stars. Like dust and debris. But in 2015, an astronomer found something peculiar around a star. While analyzing distant regions in space, some 1,475 light-years from Earth, astronomers noticed that there was something odd about the brightness (brightness) of a star dubbed KIC8462852. Scientists analyzing the data had noticed a 22% drop in the star’s brightness.

Several theories have been put forward to explain the star’s irregular variations in brightness. Several hypotheses have been put forward to explain the massive and irregular changes in the star’s luminosity, as measured by the star’s light curve, but none has so far been able to explain all aspects of the star’s light curve. light. Some of the theories put forward by astronomers to try to explain the bizarre dimming was an irregular ring of dust around the star. Another explanation was that a swarm of comets was orbiting the distant star. But a more alien explanation involved advanced extraterrestrials. What if, 1475 light-years from Earth, there was a hyper-advanced extraterrestrial civilization? What if this incredibly advanced civilization had built something called a Dyson Sphere around the star? A Dyson Sphere is an extraterrestrial megastructure that surrounds the star or parts of it and harnesses the star’s energy.

This mini-documentary series examines what scientists have discovered and questions whether the existence of a massive Dyson Sphere around the star is still possible.