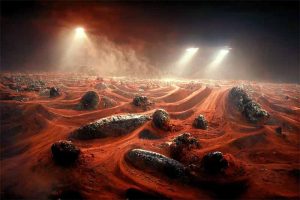 Scientists have discovered that the cloud systems on Earth and those on Mars are eerily similar.

Mars, our neighboring red planet, continues to surprise us with its many mysteries. As landers and rovers work tirelessly to try to find traces of life on Mars, several orbital missions are studying the planet from space. The European Space Agency’s Mars Express mission has revealed that Mars produces clouds similar to those in tropical regions of Earth. There is a big difference between the atmospheres of Earth and Mars. Unlike Earth’s atmosphere, which is rich in nitrogen and oxygen, Mars’ atmosphere is almost entirely made up of carbon dioxide. The atmosphere of Mars has a density less than one fiftieth that of Earth. It is comparable to the density observed at 35 km above the Earth’s surface.

The clouds of these two planets are remarkably similar despite their great differences, perhaps because similar processes formed them. An in-depth look at two dust storms that took place near the Martian North Pole in 2019 has been published in a new study. Storms have been observed to brew around the receding ice sheet during the spring at the North Pole. One of the cameras used to study Mars was the MARCI camera aboard NASA’s Mars Reconnaissance Orbiter. Two cameras aboard Mars Express – the Visual Surveillance Camera (VMC) and the High-Resolution Stereo Camera (HRSC) – were also used to image the storms from orbit. Over a period of several days,

Images taken by the HRSC show spiral shapes in their widest views. Their origin is similar to that of extratropical cyclones in the middle and polar latitudes of the Earth, which are between 1000 and 2000 km long. Mars presents a peculiar phenomenon, as the images show. According to them, Martian dust storms are made up of smaller clouds arranged in a regular pattern, like grains or pebbles. Earth’s atmosphere also exhibits this texture in its clouds. Since warm air is less dense than cold air, convection creates familiar textures. This type of convection appears to be a closed convection cell, where air rises in small cloud pockets. Cooler air can sink below warm air in sky gaps around cloud cells. On Earth, clouds form when water condenses in rising air.

As observed by Mars Express, dust clouds on Mars are formed by the same process, but columns of rising air are mostly dust rather than water. Under the effect of the sun’s heat, the dust-laden air rises and forms dust cells. A zone of descending air surrounds the cells, which contains less dust. As scientists have revealed, this gives rise to the granular pattern we know in clouds on Earth.