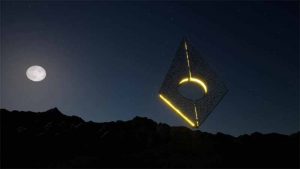 In 1997 one of the biggest and most incredible UFO sightings in history took place, the “Lights of Phoenix”. 25 years later, we have absolutely no idea what more than 10,000 people saw above Phoenix, Arizona.

Now that we’re taking UFOs seriously, it’s time to look back at some of the most incredible UFO sightings reported over the years, and what better case to kick off than the “lights of Phoenix” one? Over 10,000 people witnessed strange lights hovering in the sky. Thousands more saw strange formations in the sky. These luminous objects produced no sound. And the news made headlines around the world. Eventually, the government ridiculed these comments. And vague explanations were given in an attempt to calm people who were nervous about what they had seen. The objects in question were spotted in the sky for about three hours between 7:30 p.m. and 10:30 p.m.

The Phoenix Lights by retro.visor2814 on Sketchfab

Thousands of people have witnessed this sky. And many videos and photographs were produced by stunned viewers who couldn’t believe their eyes. Reports of strange lights range from objects described as square-shaped objects with lights attached to their base, to UFOs whose lights were arranged in a circular fashion. But the events can be split into two observations. A triangular formation of lights flew over the state, then stationary lights reminded us that they hovered in the Phoenix sky.

It was 25 years ago. And the UFOs of then and those of today are very different. It’s because today people, scientists, the military and the government are very, very interested in UFOs. So much has changed in two and a half decades that the Pentagon hinted in 2022 that UFOs are extraterrestrial in nature. Shortly after the sightings over Phoenix, explanations surfaced. These are planes participating in Operation Snowbird, an Air National Guard training program based out of Davis-Monthan Air Force Base in Tucson, Arizona. The second sighting was identified as flares dropped by an A-10 aircraft flying over Phoenix as it returned to base.

Perhaps the worst in this case is the attempt by Arizona Governor Fife Symington III, who at a press conference jokingly revealed that they had found the person responsible for the sightings, in bringing on stage a man dressed in an alien costume. This shows us how insignificant these sightings were to people at the time. Perhaps, and only perhaps, some parts of the government were interested in these sightings, because, as we know, the government conducted several UFO research programs in secret. But in 1997, that was how the government and most skeptics reacted to the subject. Today, however, things are different.