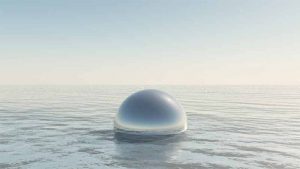 If you look at the evidence we have so far, most of the UFO videos we see from the military are filmed near or over bodies of water. So why aren’t we paying more attention to Unidentified Underwater Objects, or USOs?

In light of what is happening with the subject of UFOs, it is important to ask where these objects came from, assuming they are not technology of this earth. So, suppose, for example, that these objects are indeed otherworldly technology. They are visitors from elsewhere. As far as we can tell, they are not hostile. They explore. And while we assume they are aliens from another planet, what if the UFOs we see today are actually from Earth? Still alien technology, but one that’s been around for a while.

Look up, but also down

You might say that makes no sense. Listen to me carefully. Many of the UFO reports we have read in recent months and years are near or over bodies of water. Take, for example, the 2004 encounter where US Navy pilots were “in pursuit” of unidentified flying objects whose nature they could not explain. The videos show flying vehicles that appear to lack traditional propulsion systems. They don’t have traditional wings or tails. It’s not airplanes or drones, or helicopters. These unidentified objects can outrun our most advanced fighter planes. It is as if these objects are not bound by the laws of physics as we understand them. We call these objects transmedium UFOs. The encounters described above took place well off the coast of the United States. Above the ocean.

But back to the pressing questions I want to address in this article. Where do we see most of these objects? Where do they seem to appear most often? The answer is: water bodies. They appear over oceans, lakes on land, or near such bodies. This makes us wonder why above or near bodies of water. What is the connection between so many UFO sightings and water on Earth? After all, the earth’s surface is 71% covered with water. The oceans contain 97% of the Earth’s water. This water, untreated, is too salty to drink, for cultivation and for most industrial uses, with the exception of cooling).

Remember the video of the UFO splitting in two near an airport in Costa Rica? The object filmed by a customs plane shows an object moving quickly and being followed by the pilots. They follow the object as it moves over land and eventually reaches the sea. There, something unexpected happens: the object plunges into the sea with no visible splash and, moments later, reappears and separates into two separate UFOs. However, that’s not the only such footage we’ve seen. Now that more and more people are interested in the UFO phenomenon, more and more footage is being uploaded. Jeremy Corbell, for example, has posted several interesting UFO videos in which we see objects that seem to defy explanation.

One of these videos shows a military vehicle following a UFO over water. At some point, this object plunges into the ocean without splashing and disappears, never to be seen again. It is worth mentioning that the military searched for wreckage but found nothing. These so-called unidentified submerged objects are as important as UFOs.

These objects are what the Pentagon calls transmedium UFOs. Transmedium UFOs are on the list of objects to be studied by the Pentagon UFO team. These UFOs apparently have the ability to manipulate matter around them. They seem to disobey the conventional laws of physics that our technology must obey to work. This technology, as seen in various videos, allows them to do things that our planes cannot. It allows them to move through the air as if there were no air resistance. These UFOs are entering the ocean at high speed, as if the water wasn’t even there. It’s almost as if these transmedium UFOs can manipulate matter.

Now that we’ve eliminated all the constraints and prejudices regarding UFOs, it’s time to start looking. But not only in the sky. Not just in space. In the air. It’s time to pay attention to why such objects are found near water. If some of these objects intentionally enter the Earth’s oceans and lakes, we have to ask ourselves the question: “Why is this so?” And these questions should not be ridiculed. This question needs to be seriously considered.