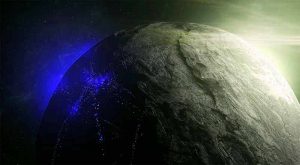 According to a paper published in the Proceeding of the National Academy of Sciences , life should be relatively common in the universe.

Are we alone in the universe ? This is perhaps one of the most important unanswered questions in human history.

For millennia humans have gazed at the stars wondering if there was something or someone else out there beyond the darkness and dazzling stars?

Perhaps, as soon as ancient people developed the ability to think, they wondered if there was something more up there in the sky.

Thousands of years later, and despite our sophisticated technologies and life-changing gadgets, we cannot understand the cosmos we live in, nor explain and answer the question of whether we are alone in the universe. ?

But suppose we make an educated guess and rely on facts like the number of stars in our galaxy, the number of confirmed exoplanets, and the idea that every star is home to at least one planet. In this case, I think we could then say that it is very unlikely that we are the only planet where life has developed in the entire universe.

Now, a new study has estimated the odds that not life but intelligent life will emerge beyond our planet, and the results come as no surprise. A Columbia University researcher has used Bayesian statistics to better understand the odds of extraterrestrial life appearing in the universe. Bayesian statistics is a system for describing epistemological uncertainty using the mathematical language of probability.

To understand extraterrestrial life, we must first look at our own planet and its evolution…

. Scientists claim that life on Earth arose when our planet’s environment was stable enough to allow it to form. We know for sure that the first multicellular organisms – which eventually gave rise to our modern civilization – took longer to evolve, around 4 billion years.

But even with this knowledge, we are still unable to explain whether life emerged on another planet in the universe.

Although we are unable to answer the question of whether extraterrestrials exist, David Kipping, an assistant professor in the Department of Astronomy at Columbia, published this study in Proceeding of the National Academy of Sciences .

The article examines the emergence of extraterrestrial life from a statistical perspective.

“The rapid emergence of life and the late evolution of humanity, in the context of the evolutionary timeline, is certainly suggestive,” Kipping explained. “But in this study, it’s actually possible to quantify what the facts are telling us.”

Using data such as the timeline of life’s first appearance on Earth and the evolution of humanity, the researcher asks how often we might expect life and intelligence to reappear on our planet if Earth’s history were to reset and repeat itself.

Essentially, the researchers asked what were the chances of life and intelligent life appearing if Earth was a young planet that had just formed the conditions necessary for life as we know it to exist. Would something have happened differently, or would everything have repeated itself?

“Analysis can only provide statistical probabilities, but the case of a universe teeming with life appears to be the favorite bet”. explained Kipping .

“This technique is akin to betting on the odds,” Kipping said. “It encourages the repeated testing of new evidence against your position, in essence, a positive feedback loop of refining your estimates of the probability of an event. »

The four aforementioned theories were integrated into Bayesian mathematical formulas, allowing the researcher to weigh the models against each other.

Kipping argues that if exoplanets in the universe exhibit similar conditions and evolutionary timelines to Earth, life should be able to emerge spontaneously across the universe.

Post Views: 100,181
Tags: Study suggests our universe should be teeming with extraterrestrial life