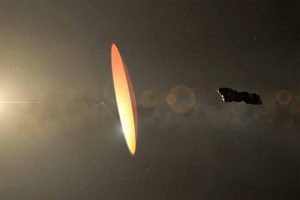 An “interstellar interceptor” would be placed at the Earth-Sun L2 Lagrange point, waiting for an opportunity to capture an incoming interstellar visitor for study.

One of the strangest objects to pass through our solar system is a visitor from a distant solar system. In 2017, scientists discovered ‘Oumuamua. Observations of the object quickly revealed that it was an interstellar visitor. It was not bound by gravity to our sun and travels through interstellar space, jumping from star to star. Then, a few years later, we discovered another called 2l/Borisov, but not as unusual as ‘Ouamuamua. There is no doubt that many other such objects exist.

Since these objects come from another star system, studying them would greatly help astronomers understand how space works. The only logical step is therefore to visit an interstellar object. Although it may seem impossible, an article has recently been written that opens the way to this possibility. We also cannot forget to mention that ‘Oumuamua was nothing like a comet. It didn’t look like an asteroid either. And Harvard astronomers have proposed that it is an alien spacecraft. So what better way to determine what ‘Oumaumua was than to intercept an interstellar object? According to a report published by Universe Today, the LSST will detect between one and ten objects the same size as ‘Oumuamua per year as part of the space and time survey conducted by the Vera C Rubin Observatory.

To catch an interstellar visitor, we must therefore position the “interstellar interceptor” (ISI) strategically. And according to the calculations of astronomers, the best place to store the ISI is the Lagrange point L2 Earth-Sun. This is where the James Webb Space Telescope is located. This setup has a few advantages. First, the Interstellar Interceptor would require very little fuel three. An ISI might need to be stored for a long time. The researchers calculated that in ten years, an ISI stored at L2 has an 85% chance of finding an object of interest the size of ‘Oumuamua. It’s just a matter of patience and waiting for the right moment to detect interstellar objects. When the ISI reaches the interstellar object,

Post Views: 100,225
Tags: Scientists are drawing up plans for an 'interstellar interceptor'