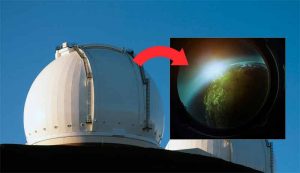 Thanks to its advanced technology, the instrument can detect planets as small as Earth. Experts say it can even detect smaller planets. Additionally, it can detect Earth-mass planets in the habitable zones of smaller, cooler stars.

Our galaxy is quite a big place. And it’s full of people. Full of stars, dust, planets, possible moons around these planets, countless comets, asteroids, remnants of planets and much more. To discover these wonders of the galaxy, we need very sensitive telescopes. We need large telescopes. Luckily for us, we are developing observation devices at an incredible rate. The very latest technology to help us explore the cosmos was recently installed at the Keck Observatory in Hawaii. The Keck Observatory in Hawaii has been equipped with an instrument designed to discover and characterize hundreds, even thousands of exoplanets. Using the method of oscillations or the method of radial velocities,

To try out this new astronomical “toy”, scientists decided to observe the largest planet in our solar system, Jupiter. While KPF will regularly observe stars, the KPF team chose to celebrate KPF’s planet-finding capabilities by directly observing Jupiter as a warm-up.

Hilton Lewis, director of the Keck Observatory, said the KPF marks a significant step forward in the search for habitable Earth-like planets around other stars. The discovery of extraterrestrial life has been one of the most promising goals of scientists for nearly a decade. Finally, the KPF will allow them to step up a gear in the search for habitable worlds. Scientists acknowledge that it has been difficult to find small Earth-like planets. The discovery of such planets increases the chances of discovering extraterrestrial life. But finding them is difficult due to the weak effects these planets have on their host star. In other words, it was difficult to spot these worlds, given the technology we had. With the Keck Planet Finder, things have changed.

The KPF detects a planet by observing the periodic motions of its host star, caused by the planet’s orbit around the star and the gravitational pull it exerts on it. Starlight oscillates, much like the sound of a siren changes frequency as it moves away or closer to you. This is called the Doppler shift. In a spectrum (a display of the different frequencies of a star’s light), the KPF will look for this stellar oscillation to detect planets. In general, the smaller the planet, the weaker the oscillation. Thanks to its advanced technology, the instrument can detect planets as small as Earth. Experts say it can even detect smaller planets. In addition, it can detect Earth-mass planets in the habitable zones of smaller, cooler stars, but not in the habitable zones of sun-like stars. At least not yet.

Adjust and tweak the KPF

In astronomy, a habitable zone (also called the “Goldilocks zone”) is the region around a star where water can exist in liquid form. Water is essential to life as we know it. According to Howard, habitable zones are closer to cooler stars. In this zone, Earth-like planets would huddle close to their star as if it were a campfire. To be able to detect Earth-mass planets orbiting stars like our sun, Earth’s true analogues, we will continue to tune and tweak the KPF until we can detect even weaker oscillations, explained the researcher, announcing that this is just the beginning. Speaking of Earth’s identical twins, a recent studyrevealed that only 1% of habitable planets are true pale blue dots like Earth.

In addition, the instrument will answer mysteries regarding the surprisingly wide range of planetary systems discovered so far. It will also make it possible to determine the composition of thousands of known planets. In addition to discovering nearby planets, the KPF will also identify those that can be imaged directly by other telescopes, such as the future Thirty Meter Telescope. This telescope could take direct images of planets orbiting their star.