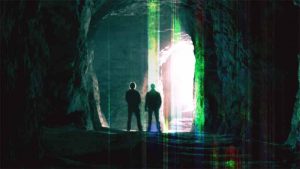 Puerto Rican ufologist Jorge Martín has spent much of his life investigating UFO-related phenomena on the island, uncovering some truly intriguing cases. 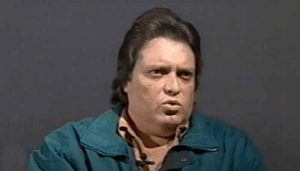 In the 1980s, something strange started happening in Ponce City. Locals reported a mysterious underground vibration and loud noises that seemed to come from underground. Jorge Martin got to work on the case, discovering something very strange.

The authorities found an explanation, and thereafter the vibrations and noise ceased. Although the case has been forgotten, for the investigator it was the event that prompted him to take up ufology, interviewing people and investigating similar cases. He would soon find out that he wasn’t the only one.

Jorge Martín and the Strange Events in Puerto Rico

In 2012, the researcher found a photo showing mysterious structures under the island.

They were south of the town of Ponce, extending east to the island of Vieques, Puerto Rico. One of them was a very straight, flat line, like a square structure.

Jorge Martín first thought it was a secret US military base. After all, they had long occupied the Roosevelt Roads naval base in Ceiba, in the east of the island.

He advanced this theory when he discovered that the straight line connected the continental shelf at one point in two parallel strips. It’s directly south of Ponce. Martin called these lines an “underwater tunnel”.

On the other hand, the colossal size of the structures and their great depth would make it very difficult for the base workers to survive. Moreover, it would be almost impossible to build such a gigantic complex miles below the surface. Unless you have very advanced technology.

He also discovered that the structures were extremely old. So much so that they could be from the last ice age.

Jorge Martín then associated this base with the vibrations and the mysterious noise that the inhabitants of Ponce heard in the 1980s. “Someone” had used the tunnel to connect the structures to the platform and, probably, under the town, there was another base which was also connected.

Statements about UFOs and extraterrestrials 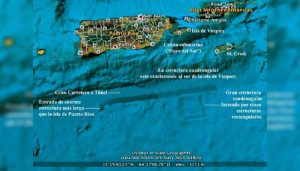 According to those interviewed, the sound was heard as if the earth was being drilled somewhere very deep. Like large bulldozers and other similar machines.

During the investigation, he found photos of UFOs, which support the theory of the existence of underground bases somewhere under the island of Vieques. The images were taken by astronaut Story Musgrave’s camera during NASA’s STS-80 mission in 1996.

He surveyed the residents of Vieques, asking them if they had seen anything strange. Many witnesses claimed to have seen strange events related to extraterrestrials.

A fisherman named Carlos Ventura told Jorge Martin that he believed there was an unusual place underwater in the Vieques Submarine Canyon. Another fisherman named Alicio Ayala said much the same, mentioning the presence of UFOs at the site.

One of the most shocking cases involving Jorge Martín happened in 1970, at the top of Cero Las Tetas. One night, fisherman José Chino Zaya and his friend were fishing in the area when they discovered very deep caves. They entered it, only to emerge terrified moments later when they came upon a group of small humanoid creatures. 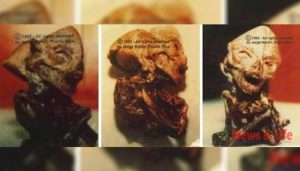 Zaya even said that one of the creatures grabbed him by the leg and hit him hard on the head with a stick. Immediately, the humanoid dropped dead. The fishermen fled, taking the body with them.

Once home, the man put the creature in a jar and filled it with formaldehyde. He was then forced to report the incident to local police in Las Ochenta, near Salinas.

Officer Osvaldo Santiago visited Zaya and examined the creature. The fisherman was so scared that he asked the policeman to take the creature away as he feared others would come looking for him.

Soon the whole district was aware of the event. It is believed that some time later an unnamed businessman showed the jar containing the creature’s remains to Professor Calixto Pérez of the University of Puerto Rico for examination.

The professor said it was “something extraterrestrial”. His skull was very large for a small and skinny body. The eyes were also very large. The creature was barely 30 centimeters long.

Jorge Martin was able to take a photo of the dead creature and wrote down all the details of his encounter with it. A photo of the creature appeared in Magazin 2000 magazine, but nothing has been heard of since.