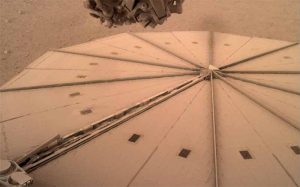 NASA is actually preparing to say goodbye to its InSight lander after massive accumulations of dust coated its solar panels, making it impossible for the lander to recharge its batteries to continue operating. These are probably the last two photos taken of the Martian lander.

Nearly four years after its successful landing on Mars, two years on Mars, NASA’s Insight lander is starting to run out of energy. So these photos , released on October 30, could be the last pictures of the Martian surface and parts of the lander that Earthlings will see. The photograph shows a seismometer partially covered in dust in the foreground. A second image shows the lander’s shovel removing soil from the Martian surface. 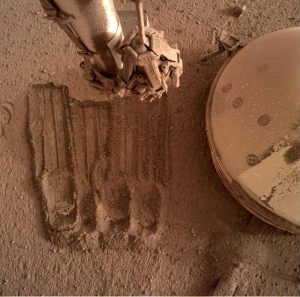 A robotic arm from InSight is visible in this photo. Image credit: NASA

Windblown dust thickens on the spacecraft’s solar panels. It causes a decrease in its energy production. Therefore, the team is taking steps to continue as long as possible. The end of the mission should take place in about ten days. Insight launched to Mars on May 5, 2018. On November 26, the spacecraft reached the Red Planet. The lander performed beyond expectations by revealing incredible details about Mars, its weather and, most importantly, its interior. The lander also recorded the sound of hundreds of Martian earthquakes. InSight has helped scientists on Earth understand that Mars is still a dynamic planet.

Another photo taken by InSight shows parts of its seismograph covered in dust. Image credit: NASA

“The day is coming when I will be silent, ending my almost four Earth years (more than two Martian years) of studying the red planet. As my time on Mars draws to a close, my team is helping to ensure that scientists can get the most out of everything I’ve collected,” reads a post on the company’s Twitter account. assignment on November 1. While we all knew that InSight would eventually become inoperative due to the massive amount of dust covering its solar panels, everyone was probably hoping that by some “miracle” the Martian winds would come to InSight’s rescue, lifting some of the dust, allowing the lander to recharge. Unfortunately this did not happen,