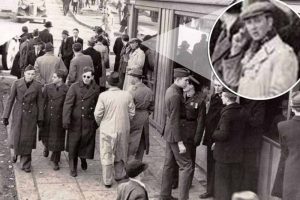 A photo taken in 1943 of a man “talking on a cell phone” has gone viral on social media.

Journalists discovered that this photo was actually taken in 1943, in Reykjavik, Iceland. It represents American soldiers, but this man in a white coat is absolutely not a soldier and clearly distinguishes himself from the other people present in the photo.

A man holds an object in his hand, which he brings to his ear like cellphone owners do. And he has his mouth open, that is, he is apparently photographed at the time of the conversation. 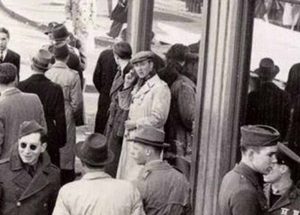 And next to him, there is no one he could talk to, no one is looking in his direction.

Social media users were quick to conclude that the photo was of a time traveler who hadn’t expected to be photographed.

“He is there standing alone, wearing a different headdress than the others, and a different scarf, and he behaves as we would nowadays, talking on a cell phone,” writes Christian Hoffmann, who was the first to post this photo in an Icelandic Facebook group.

Skeptics, meanwhile, believe the man in the photo may have simply looked at his watch or decided to scratch his ear just as the photographer was busy working.

However, there is definitely some sort of rectangular flat object in the man’s hand. And if it’s not a smartphone, then what is?