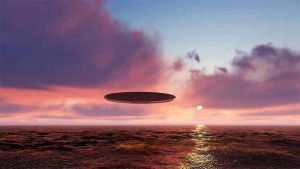 Kevin Thomas, a crew member of the USS Nimitz, claimed the US warship encountered a huge “triangular, black” UFO that emerged from the sea before blasting off into space. 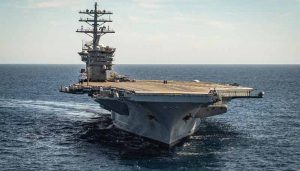 The USS Nimitz is best known for its 2004 Tic-Tac UFO encounter.

However, Kevin Thomas, a member of the crew, claimed that he had previously had an incident with another unidentified flying object.

Kevin Thomas and the “other” USS Nimitz incident

Two Navy pilots filmed the Tic-Tac UFO in 2004 during a routine training mission in the Pacific.

The US Navy has made it official that it was a UAP, an unidentified aerial phenomenon. This after being unable to explain the sighting.

The mystery has deepened over time, with the Pentagon refusing to answer questions about the possibility of underwater UFOs. However, the US government took a keen interest in these sightings and established an office to investigate them.

Like the Tic-Tac UFO, sightings of the “Black Triangle” have been recorded for decades. Often dismissed as secret planes or atmospheric anomalies.

But in an interview with Quest TV, Nimitz crew member Kevin Thomas described one of the missions carried out on the ship in 1991, more than ten years before the famous encounter.

He explained that they were in the process of “darkening” the ship, that is, turning off all the lights, since none of them can be seen. This allows camouflage in the dark of night to avoid attacks.

“When I wanted to open the bulkhead it was closed so I figured that’s okay, I’ll just get out that way, so I found my way to the starboard side of the ship and I looked around the corner. There was something halfway out of the water. It looked like a huge black triangle.

Kevin Thomas estimated it to be taller than the Nimitz at around 182 yards. The object was high, static, then rose about 10 to 12 meters and finally disappeared. Without emitting the slightest turbine or release noise. 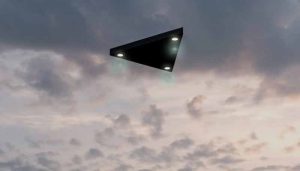 He explained that the next day, two men visited him and started questioning him. He automatically felt he was in trouble, that he saw something he wasn’t supposed to.

Thomas said he had no idea what had happened until, years later, the Tic-Tac UFO footage was released.

The Nimitz’s crewman claimed that there is some similarity between the two events; they both have the same motion at supersonic speeds, above Mach 15 and Mach 20.

Kevin Thomas’ testimony came to light when the Pentagon said it had a clear photo of a black triangular UFO emerging from water.

However, the existence of the photo has never been officially confirmed, although many claim it exists.

In September 2019, the Navy finally admitted the veracity of the videos taken in 2004. They show 3 encounters of fighter jets with UFOs.

This incident has become one of the most controversial sightings of all time. It was even discussed at the congress, but without explanation.

Some experts suggest that the leaking of these videos was done to prepare humanity for a “fake alien invasion”. Others suggest it was to reveal an official contact from several years ago. What is certain is

Post Views: 100,146
Tags: Kevin Thomas: "A triangular UFO emerged from the sea before flying into space"