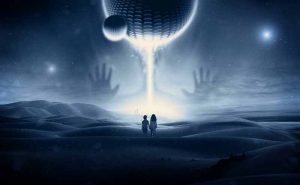 It is quite possible, and scientists are trying to figure out if there are hidden dimensions.

One of the new scientific theories suggests that different dimensions exist simultaneously in the same space. They are superimposed on each other, as one can superimpose an image. We just don’t have the ability to see those dimensions…higher or lower than what we perceive.

Our perception of reality – the sky, the trees, the grass, etc. – looks like a photograph. Photography represents our perception of the world in three dimensions. This is all the information that our brain tells us is important. 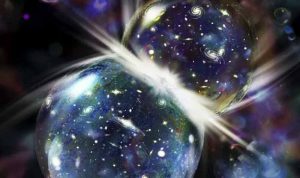 But other “photos” are superimposed on the one we see. They are stacked on top of each other, like layers of images in Photoshop. We simply cannot see other “pictures” because our brain can only interpret three dimensions: length, width and height.

The theory suggests that other dimensions can interact with each other through quantum effects, and that the universe is actually filled with these parallel layers. Some dimensions can intersect or pass through others, creating strange phenomena or even strange objects like UFOs.

The invisible alien theory is the belief that certain UFOs can be controlled using quantum mechanics. This would allow UFOs to appear and disappear while remaining in the same area.

For example, some recent discoveries in quantum physics include entangled particles, and the fact that two separate particles can act on each other instantaneously at any distance. This could be proof of the existence of another dimension!

If UFOs exist in dimensions greater than our own, they won’t have to worry about the problems of building engines capable of exceeding the speed of sound and reaching the speed of light. These rules would not work if there were other rules.

According to this theory, if a UFO can alter the electromagnetic field around it, it can manipulate physical reality or even vanish from it.

The ship may be in the same physical location, but instead of appearing in our reality, it may appear in another dimension. The human eye only perceives three-dimensional space, and the UFO will then be perceived as disappearing and reappearing.

UFOs may have the ability to warp gravity. This means the craft can fly on its own, without traditional propulsion systems or wings.

UFOs may have the ability to manipulate time and space. This means that the ship warps the space around it and can fly at impossible speeds, such as performing a short warp jump.

In general, a UFO can go anywhere, anytime. 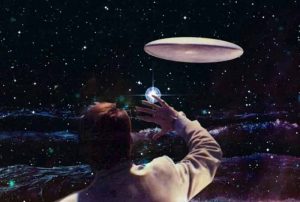 Also, keep in mind that many witnesses to UFO sightings and encounters have reported feeling that UFOs were somehow communicating with them. This can be done through feelings, thoughts or images.

The technology of any alien craft is so advanced that it is like comparing a computer to an ordinary abacus. People won’t even be able to understand how these technologies currently work (unless “they” decide to explain it to us), and the closest analogy would be magic!

If these theories are correct, that means our entire universe is more or less a hologram. This means that any UFO can rewrite the information around it at will in order to navigate, travel at high speed, and even manipulate physics.

Although there is no evidence that they are able to alter time, some theories suggest that UFOs use quantum physics to travel outside of ordinary space and time.

This means they can be in multiple places at the same time…or easily move through different periods of human history.

There are many UFO encounter accounts in which people have seen the same UFO at two different times…and sometimes in two different places!

The question then arises… why are so many UFOs suddenly manifesting themselves to us?

According to one theory, the increase in the frequency of UFO sightings and reports of encounters with these phenomena is due to x becoming easier to detect.

Sensors have become more sophisticated, and there are more cameras and eyes watching the sky. Also, there are new systems, such as speed cameras, that work differently than older models.

All of this makes it easier to detect strange objects in the sky and record UFO sightings.

Others suggest that these UFO sightings are part of an ongoing information campaign to make humanity aware of the idea of ​​other beings.

Another theory says that the UFOs are there because it’s an important time in human history and something grand, catastrophic, new – the Apocalypse – is about to happen.

…Perhaps they are interested in the current development of our planet, for example the growth of our technologies and the potential for space travel. Or…they may also be concerned about our nuclear weapons.

Some people even think that UFOs are actually trying to tell us to stop using these weapons and take better care of Earth and save our civilization. Let’s be honest, we’re not good at it.

If they are benevolent, and if they altered the DNA of early humans to create homo sapiens, how would we humanity react to that?

On the one hand, there are people who may feel betrayed or cheated. They might feel like the “creators” have used humanity for their own ends and they’re not really being nice.

On the other hand, there are people who will be fascinated by this discovery and grateful to know more about our origins.

And the most important question will be: “Why? “. The purpose of the alien genetic manipulation will be a big factor in people’s reaction.

Post Views: 100,141
Tags: The occult dimensions or the theory of “invisible extraterrestrials”