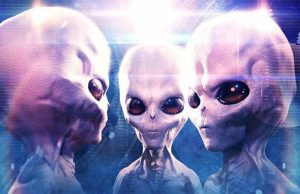 Professor Michael Garrett, director of the Jodrell Bank Center for Astrophysics in Manchester, said: “There could be other things out there that have a capability that is completely beyond what we can even imagine.

“It’s a bit like ants trying to communicate with humans.”

Dr Louisa Preston, an astrobiologist at University College London, added: “I bet we are like ants. We have an inordinate ego in our ability to think. »

An overwhelming amount of people have admitted to believing in extraterrestrial life, according to a Pew Research study. In addition, 34% of participants said they did not believe it, and 2% refused to answer.

Despite the portrayal of extraterrestrial life in the media, 87% of Americans do not view UFOs as a threat to national security. Ten percent saw them as a major threat – and just over a quarter thought aliens would be friendly up close and in person.

Post Views: 100,746
Tags: Humans will not be able to have conversations with aliens