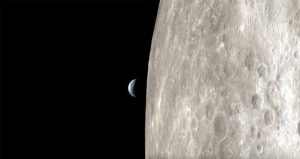 As the spacecraft exited the far side, the astronauts began to report a strange light on the lunar surface.

There are countless theories about the presence of extraterrestrials on Earth. Many of these theories are based on empty claims and minimal, if any, evidence. When it comes to UFOs, things change. There is evidence. And some of that evidence is more than compelling. The subject of UFOs has taken off in recent years. It all probably started in 2017, when three Navy videos were declassified. These videos show Navy pilots interacting with unidentified flying objects. Fast forward five years, and everything about UFOs has changed. NASA recently revealed the list of astrophysicists who research UFOs. NASA, which had previously denied any connection with the UFO phenomenon, is now actively studying it.

The Pentagon has given a new name to its UFO office. But above all, he put a special effort into the study of so-called “transmedium” UFOs. These types of UAPs exhibit characteristics as if they can manipulate the air or water around them. An example of a transmedium UFO has been recorded off the coast of Puerto Rico, and you can see video of the object here. And even so many of us have seen UFOs at least once. We have now seen actual military images of these objects. Particular interest should probably be given to observations in space. What I mean by that is that we should look at the many reports and comments of astronauts and former astronauts on UFOs. There are several examples of this in the comments of the astronauts of the famous Apollo 8 mission.

In a documentary about the unexplained, we reminisce about when Apollo Eight saw something truly remarkable on the lunar surface. While the spacecraft was orbiting the Moon, and just entering around the far side of the Moon, the astronauts saw something they couldn’t explain on the lunar surface. While orbiting the far side of the Moon, communications with Houston were cut off. The astronauts were therefore unable to bring back to Earth what they had seen. The mission was a success and the astronauts returned home safe and sound. And then, a few years after the mission, information about what they had seen finally surfaced.

As will be known later, and through declassified transcripts of radio communications that took place during the mission, we learn what Apollo eight saw. As the spacecraft exited the far side, the astronauts began to report a strange light on the lunar surface. Astronaut Anders comments on seeing a strange light on the lunar surface, to which Astronaut Borman replies, “Is that a bonfire? Astronaut Anders responds, “Maybe they’re campfires.” The commentary of the astronauts aboard Apollo 8 is fascinating because they saw, on the far side of the Moon, lights on the surface. However, there is no visual record of what the astronauts saw.

The story gets even more interesting when Apollo 11 saw something similar. So now we have two Apollo missions reporting the same thing. Apollo 11, however, provides photographic evidence of what they observed. And as Nick Pope pointed out, it’s not a rumor or a conspiracy. This is something that has been documented. Finally, a natural phenomenon was ruled out. What the Apollo 8 astronauts saw remains a mystery, although several theories have been put forward. As is often the case with unexplained sightings, these are more often than not swept under the rug. Either way, it’s interesting to see what future astronauts on the Moon will discover.

Post Views: 100,132
Tags: What were the strange lights Apollo 8 astronauts saw on the Moon?