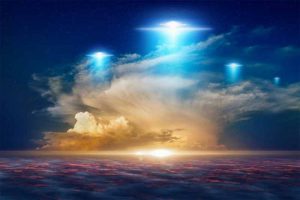 Looking up at the night sky, one can’t help but wonder if there is life elsewhere in the cosmos. There probably are. I firmly believe that. Not just because of a hunch, but because the universe is such a weirdly big place. It is really huge. Observatories like James Webb help us better understand how the cosmos works and our place in it. But this article is not about James Webb. It is about extraterrestrial life and another interesting article published by Professor Avi Loeb. The study has not yet been peer reviewed.

Recently, Professor Loeb and his Harvard colleague, Carson Ezell, published a study. In this study, they looked at how many Oumuamua-like objects might be in and near our solar system. The result ? 4,000,000,000,000,000 (or four quintillion). Professor Loeb proposed a few years ago that the interstellar object ‘Oumuamua is likely evidence of extraterrestrial contact. According to the Harvard professor, ‘Oumuamua could have been artificially made and be a spacecraft sent by an alien civilization to explore the cosmos. Each of these objects has been proposed as a visitor from another star system, and each of these objects is, perhaps, artificially created.

4 quintillion may seem like a lot. But our solar system is a pretty massive place. Moreover, the distance between our star system and Proxima Centauri, our nearest neighbor, is even greater. We live in a solar system that stretches over 9 billion kilometers. To reach Proxima Centauri, one must travel another 20 trillion kilometers. What does that mean ? Each of these four quintillion possible interstellar objects could be extremely difficult to find for further study. We should note that Loeb is not claiming that our Milky Way is filled with quintillions of alien craft. In the end, he never explicitly stated that ‘Oumuamua was a robotic probe or a manned vessel, but simply that it should be considered an option. It was based on a number of elements, mainly the strange shape of ‘Oumaumua and its movement as it moves away from the Sun.

Therefore, Loeb and Ezell’s calculations do not represent the alien craft population. They calculate the number of alien spaceships or other man-made objects that might exist. ET rocket parts left over from a previous mission. Fragments of alien technology that we don’t understand. According to Loeb and Ezell, the calculations are simple. “One can use recent interstellar object detection rates and known capabilities to estimate the density of similar objects in the solar neighborhood,” the researchers wrote, according to the Daily Beast. Researchers began by examining all objects outside the solar system that were detected by astronomers.

It follows that these objects could come from an extraterrestrial civilization located just beyond the reach of our telescopes and our probes. And while the number the two researchers calculated seems oddly high, it’s actually the lowest number they’ve found. Their calculations came up with double figures. We have discovered four interstellar objects in eight years. According to their calculations, the solar system could contain up to 40 decillions of interstellar objects, including those beyond the reach of our instruments. The number drops to 4 quintillion if one focuses only on the “habitable zone” near the Sun, which is potentially exciting because if some are aliens they would be easier to detect.