Newly leaked video of flashing, triangle-shaped objects that flew over a U.S. warship is real, the Pentagon said, after UFO investigators released the clip and several other puzzling photos online.

The photos and videos were distributed by documentary filmmaker Jeremy Corbell and George Knapp, a Las Vegas-based reporter who has covered UFO-related stories for decades. The leaks include a night-vision video at sea, a series of grainy infrared images and smartphone photos captured from the cockpit of an FA-18 fighter, which had previously been posted online.

The Pentagon confirmed in a statement this week that the leaked photos and videos were captured by U.S. navy personnel, though it declined to label them Unidentified Aerial Phenomena (UAPs) — the government’s official term for a UFO.

“I can confirm that the referenced photos and videos were taken by Navy personnel,” Pentagon spokesperson Susan Gough said in a statement to the Black Vault, a site with a long history of obtaining UFO-related documents through freedom of information laws.

“They confirmed they are all genuine, but won’t give their designation,” site operator John Greenewald said.

“The UAP (Task Force) has included these incidents in their ongoing examinations,” Gough said.

“As we have said before, to maintain operations security and to avoid disclosing information that may be useful to potential adversaries, DOD does not discuss publicly the details of either the observations or the examinations of reported incursions into our training ranges or designated airspace, including those incursions initially designated as UAP.”

Corbell says the video and photos were originally shared at an Office of Naval Intelligence (ONI) briefing on May 1, 2020, and later leaked to him. He says he worked with Knapp to verify the authenticity and context of the footage before releasing it online.

“These are authentic photos and video from actual military encounters with UFOs — generated to educate high-level intelligence officers within our military on the nature and presentation of the UAP/UFO phenomenon,“ he wrote on his website.

Perhaps the most startling video is the one recorded from the deck of the USS Russell, which appears to show several unidentified flying triangles “flashing” in the clouds off the coast of San Diego. The brief video was shot through a night-vision camera in July of 2019, Corbell says.

The video shows a distinctly triangle-shaped object moving through the clouds above the warship. The object joins two other, fainter triangles in the sky before the video ends. 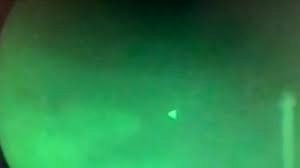 A flashing, triangular-shaped object is shown through a night-vision camera over the USS Russell, in footage leaked to filmmaker Jeremy Corbell. Jeremy Corbell/Instagram

Photos from the second event show a “spherical shaped craft” near the USS Omaha, according to Corbell. The black-and-white, grainy sequence of infrared photos depicts a black circle seemingly descending into the ocean.

Corbell says the object seemed to slip effortlessly into the water instead of making a splash and taking damage upon impact. He adds that the navy sent a submarine to search for wreckage, but they found nothing.

The third event described in the briefings involves a series of photos captured by a weapons systems officer from an FA-18 jet in Virginia on March 4, 2019, Corbell says.

The weapons systems officer snapped photos of three objects that afternoon within a matter of about 20 minutes, according to Knapp, Corbell’s collaborator. The objects were described as a “sphere,” an “acorn” and a “metallic blimp” in the intelligence briefing, they say.

An alleged UAP is shown in this image shared by journalist George Knapp, which was allegedly captured from a fighter cockpit on March 4, 2019 in Virginia. Via MysteryWire

The nature of all the objects involved remains unknown to the public, despite speculation that they might be of alien origin.

Corbell says the combined trove of footage is evidence that the U.S. Department of Defence is taking UFOs seriously — and that these phenomena are worth exploring in a “rational and transparent” way. 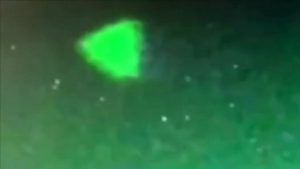 UFOs have long been a taboo subject in the scientific community, and a tongue-in-cheek topic for mainstream news.

Several leaks and Pentagon statements in recent years have added credibility to the discussion, particularly after the U.S. government confirmed that there are some flying objects that it simply cannot identify.

Pentagon officials have taken a more open attitude toward UFOs over the last two years, after studying them in secret for several years. They’ve confirmed several mysterious videos, and have started encouraging military members to document and report their UAP encounters for safety reasons.

“This is all about frequent incursions into our training ranges by UAPs,” Joe Gradisher, spokesperson for the deputy chief of naval operations for information warfare, told CNN in 2019. “Those incursions present a safety hazard to the safe flight of our aviators and security of our operations.”

The Pentagon announced its official UAP Task Force on Aug. 4 of last year. Its mission is to “detect, analyze and catalogue UAPs that could potentially pose a threat to U.S. national security.”

In other words, their job is to identify the strange visitors that keep popping up during military training missions — be they visitors from Russia, China or another world altogether.