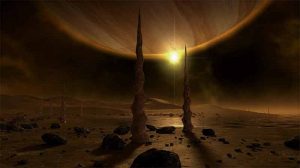 It has been suggested in the past that Phobos was an artificial object deployed by a civilization believed to have inhabited Mars in ancient times. 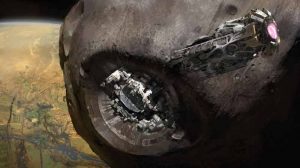 In 1945, American astronomer Bevan Sharpless detected an acceleration of Phobos that could not be explained as the result of a disturbance in Mars’ tenuous atmosphere.

This information did not receive special attention until it was picked up by Soviet astrophysicist Iosif Shklovsky who in 1959 proposed that the satellite could be a hollow object and emitted the hypothesis that it was an artificial satellite launched by an extraterrestrial civilization once present on the planet.

The hypothesis of an artificial Martian moon has gained some notoriety. It was taken up in 1966 by Shklovski himself in the book Intelligent Life in the Universe written with Carl Sagan.

Since then, various probes sent into Martian orbit have analyzed and photographed this moon on several occasions.

Among them, the European Space Agency’s (ESA) Mars Express probe, launched in 2003, which recently received a new software update for its MARSIS (Mars Advanced Radar for Subsurface and Ionosphere Sounding) instrument that allowed it to deepen the enigma of Phobos.

“We are still only at the beginning of our analysis,” said Andrea Cicchetti, member of the MARSIS team at the National Astrophysical Institute of Italy, in a press release published a few days ago. .

“But we’ve already seen possible signs of previously unknown features beneath the moon’s surface. We can’t wait to see what role MARSIS could play in finally solving the mystery surrounding the origin of Phobos.”

Phobos and Deimos are the two moons of Mars, which are ominously named after the Greek gods of fear and panic.

It should be noted that neither is particularly like a “normal” moon. Both are small – Phobos is less than 20 km in diameter – and look more like bumpy asteroids than a spherical moon like Earth.

These strange but fascinating features, along with their supposed asteroid-like compositions, have long divided astronomers as to their origins.

“Whether the two small moons of Mars are captured asteroids or made of material torn from Mars in a collision remains open,” said Mars Express scientist Colin Wilson.

“Their appearance suggests they were asteroids, but the way they orbit Mars suggests otherwise. »

The depths of Phobos

This is where MARSIS comes in. With an antenna over 40 meters long, MARSIS is able to launch low-frequency radio waves that can penetrate deep into Phobos’ core.

While most waves don’t cross the surface, those that do bounce off the internal structures and boundaries of the various materials inside the minimoon.

Examining these reflections, captured on a “radargram”, could give scientists a better picture of Phobos’ underground structures, as well as its overall composition.

The bright lines on the radargram indicate more or less harmless surface reflections, but the scientists say there is evidence of weaker “lower reflections” that could be signs of subterranean structures.

To unravel this mystery, ESA will collaborate with the Japanese Space Agency to collect samples from the surface of Phobos as part of the MMX (Martian Moon Exploration) mission, which is currently scheduled for launch in 2024.