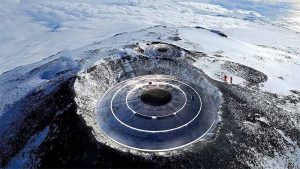 One of the largest UFO waves in Antarctica took place between June and July 1965 over Deception Island, and was observed by members of the British, Chilean and Argentine bases.

It was a clear night with starry skies and low cloud cover at the Argentinian naval base Deception, located on the island of the same name in the South Shetland archipelago.

On July 3, 1965, a group of 17 people, 14 members of the Argentine detachment and 3 Chilean soldiers visiting from the base of Aguirre Cerda, witnessed the observation of a strange luminous object evolving in the sky of the Antarctic.

The commander of the unit was frigate lieutenant Daniel Alberto Perisse, who would later become an outstanding ufologist, member of military (Permanent Commission for the Investigation of the UFO Phenomenon) and civilian (Commission d’investigations (CIU) and Directive Commission of the Argentine Federation for the Study of Extraterrestrial Sciences (FAECE)).

It was a light of solid appearance, circular or lenticular in shape, whose perimeter was blurred, its central part had reddish tints, while the edges presented colors varying between yellow, green, orange, blue and white.

It was sometimes visible with binoculars and theodolite. It made no sound and the flight altitude was estimated at 15-20 km.

Mr. Perisse estimated that the apparent size of the object was 75 to 90 meters in diameter, while one of the civilian members of the group, meteorologist Jorge Hugo Stanich, estimated the number of objects observed at four, not together, but in different places.

During the 62 minutes of the sighting, which took place during the usual weather observation, the object moved slowly, with stops, flashes, oscillations, disappearances and reappearances (an effect probably associated with low cloud cover present).

Sponsored Content
Witnesses noted that it moved in a zigzag pattern, and that its apparent size decreased as it moved away.

Stanich tried unsuccessfully to photograph the object, as he did not have suitable film for the low light conditions prevailing in the Antarctic winter, and distance and strong winds were additional adverse factors.

On the same day, the Chilean detachment, located southwest of the Argentine one, also detected object movements.

And something similar happened with the five Britons who, from their base in Antarctica, observed a strange-looking point of light that remained static for 10 minutes.

The official statement from the Secretary of the Navy

On July 6, 1965, the Secretary of the Argentine Navy informed the press in a statement titled “Sighting of unidentified flying objects in the Argentine Antarctic” as follows:

From the naval detachment of Deception, in the Argentine Antarctica, a flying object of lenticular form, of solid appearance, of a predominant red and green color, with occasional yellow, blue, green, white and orange tints, was observed on July 3 at 7:40 p.m.

It was recorded moving in a general easterly direction, changing westward at times, at a height of 45 degrees above the horizon and at a distance of about 10 to 15 kilometers.

It was noted the absence of sound, having been observed in its evolutions variations in speed, as well as having remained stationary, at times, in space.

The object was recognized in meteorological conditions which can be considered as exceptional for the region at this time of the year: clear sky, a few isolated cumulus clouds, the moon visible in its waning quarter.

The reconnaissance of the UFO was carried out by the weather observer of the detachment, as well as by 10 other people. The observation interval was 15 to 20 minutes, and photographs could be taken.

The personnel of the Antarctic naval station Orcadas also observed, in the afternoon of the same day, the reference UFO.

The object moved away in a general northwesterly direction (330 degrees overhead) and at a height of 30 degrees above the horizon, at a distance from the object, estimated at this time, 10 to 15 kilometers.

This information was transmitted by two radiograms to the Secretary of the Navy in Buenos Aires, and was supplemented by a reference to a previous sighting of the UFO, made the day before (July 2).

The observation of July 3, 1965 at the naval detachment of Deception is not the only one to have taken place in these distant southern lands.