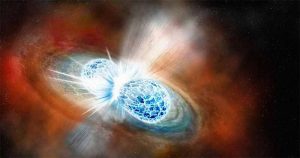 In 2017, scientists observed a spectacular collision between two neutron stars that emitted a jet of radiation so powerful that NASA says the energy released was “comparable to that of a supernova”, according to a press release from the agency .

But it took until now for scientists to dissect all the data collected, due to their complexity. Among the other intriguing discoveries: objects that seem to travel faster than light – which, of course, is impossible. But do not worry. There is a perfectly reasonable explanation.

The event, designated GW170817, is what is called a binary neutron star merger. Neutron stars are the collapsed cores of once massive stars and are among the densest objects in the universe. According to NASA, a single teaspoon of one would weigh four billion tons on Earth.

With this unfathomable density comes great gravity, enough to pull two of these neutron stars into an explosive collision that unleashed gravitational waves and gamma radiation into space. According to NASA, this is the first time that scientists have detected these two phenomena in a neutron star merger.

The Hubble Space Telescope observed the two neutron stars collapsing into a black hole following the explosion. A spinning disk then formed around the black hole, which shot incredibly fast jets of matter into space. By combining their results with those of the National Science Foundation, the scientists were able to reconstruct the event with extreme precision, in particular the speed of movement of the jets.

Initially, based on Hubble observations, it appeared that the jets were moving at seven times the speed of light. Of course, that’s impossible. Scientists attribute this discrepancy to a phenomenon known as superliminal motion. According to NASA, because the jet is approaching our planet at near the speed of light, the light it subsequently emits has a shorter distance to travel each time, giving the impression that it moves faster than in reality.

After some more calculations, the scientists found the real speed: at least 99.97% of the speed of light, which, to be honest, is still pretty darn fast.

Scientists hope their findings, published this week in the journal Nature, will make it possible to observe neutron star mergers even more accurately in the future, which could eventually help calculate the expansion rate of the planet. ‘universe.