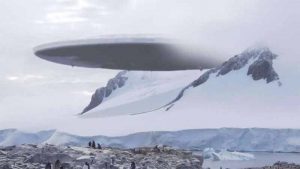 Two UFOs at once – “Unidentified Aerial Phenomena” (UAP), as these mysterious objects that roam the Earth’s atmosphere have come to be called, have been discovered by well-known virtual archaeologist and ufologist Scott C. Waring, from Taiwan.

“I saw them off the coast of Antarctica, looking at the photos that were used to create the Google Earth resource. And I identified the objects, so to speak. That is, I found that they are strikingly similar to Tic-Tac UAPs, as they were conditionally called by American pilots, who repeatedly chased similar objects.

The unusual name Tic-Tac was given for its resemblance to the famous candy. 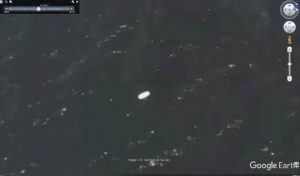 In the summer of 2022, one of these “candies” was found on Google Earth maps. The mysterious object was spotted off the California coast, off San Clemete Island – the southernmost of the Channel Islands.

And now, all of a sudden, two Tic-tac UAPs – for some reason red in color – have landed on the water in a deserted area of ​​Antarctica – far from any sign of civilization.

The size of the UFOs is the same: about 10 meters long and about 4 meters wide. If they are alien aircraft, which UFO blogger Waring says is just obvious, then each of them can accommodate several human-sized pilots. It is possible that in Antarctica they – the extraterrestrials – have a base. 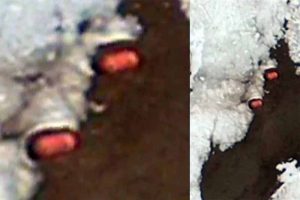 The “sweets” first became known in 2017 when a video of them somehow leaked online. In 2018, the Pentagon acknowledged that the footage was authentic. The Pentagon confirmed that they had been caught on the radar screen of American fighters.

Less than 3 months later, NASA, for the first time in history, recognized the existence of UFOs, ie UAPs.

This historic turning point – the giant leap, as it is called, in commemoration of a man’s first step on the moon, occurred against the backdrop of increased interest in mysterious phenomena and after recent public hearings by the US Congress on these same UAPs.

NASA announced that it had brought in top scientists and its “best” staff, including astronaut Scott Kelly, who spent about a year in orbit and saw a lot.

NASA promises to publish the results of the survey within a year – nothing to hide “according to the principles of openness, transparency and scientific integration. » 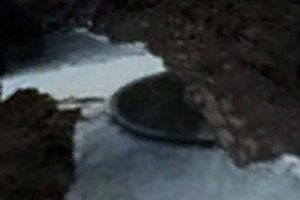 For several years, the footage circulated the internet, somehow mysteriously escaping there. And in the spring of 2020, the US Department of Defense has already published these videos – three of them – on its website and recognized them as authentic.

According to the testimonies of pilots, technicians, operators of ground radar installations, and quite simply sailors who were on board aircraft carriers, the objects in diameter reached 15-20 meters, then flew quickly, then made hovering, quickly rose to a height of 10 kilometers without visible engines and jets, changed course with accelerations of 100-1000 g. Which is absolutely impossible for human pilots if people, like us, controlled these objects.

Sometimes the objects were hidden under water. They emerged from under water without any air turbulence, without shocks, which usually accompany planes.

I wonder if there are any links between UFOs and Antarctica? Has Antarctica served as a home base for extraterrestrial visitors to Earth for thousands of years? As human exploration of the frozen continent intensifies, are we about to come face to face with the ruins of an ancient advanced civilization buried under the ice – and perhaps even aliens who still inhabit it today? the frozen continent today?

Post Views: 100,281
Tags: Scientists have been tracking UFOs flying over Antarctica for decades